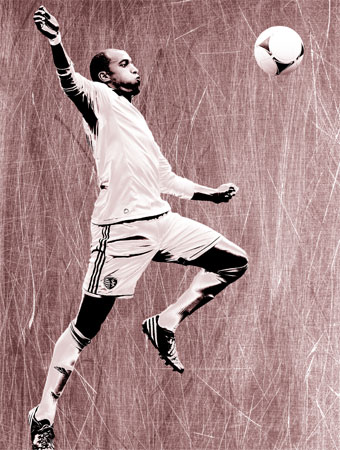 My earliest memory was watching my dad [Alex Bunbury] play when we lived in Portugal. I was six when he was playing for Maritimo and that's where my passion for the game started.

My soccer hero growing up was my dad. I wanted to emulate everything that he did. I also looked up to Thierry Henry.

My first time suiting up for the National Team was an amazing feeling. I hadn't felt anything like it before. I felt honored to play for my country. Playing against South Africa was a one of a kind experience. The stadium, the vuvuzelas… the opportunity was truly a blessing.

The quality I most admire in a soccer player is their commitment to get better and not settle for mediocrity.

The quality I most dislike in a soccer player is a quitter.

The key to my success would be the opportunity I have to maximize my potential that God has given me and to do it for His glory.

I want to improve on my heading.

My dad has had the greatest influence of my development.

I have a lot of close friends but Darlington Nagbe would have to be my closest friend.

My greatest soccer achievement would be getting caps with the national team.

My biggest soccer disappointment would be not qualifying for the 2012 London Olympics.

The most important lesson I've learned is to play every game like it’s your last, and to have fun. Enjoyment of the game is key.

My whole Sporting KC team is full of talented players.

Thierry Henry is probably the best player I have played against.

If I wasn't a soccer player I would be mentoring and helping kids with the game and incorporating my Faith in The Lord as a foundation.

My definition of success in the game is doing everything in your power to become the best player you can be. [You] might not be the best or win the most championships but to consistently give it your all [is the most important thing].