The Philadelphia Union winger started playing soccer in high school as a way to stay in shape, but that hasn't prevented him from developing a solid MLS career. 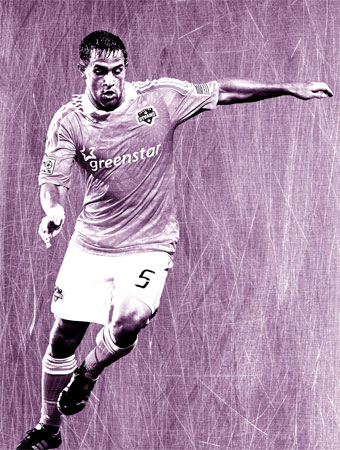 My earliest memory of playing organized soccer is junior varsity during my freshman year of high school. It was something I did to stay in shape for American Football.

When I started to love the game I thoroughly enjoyed watching Wayne Rooney play. He is carefree and works tirelessly to score goals.

My first experience with the U.S was with Bob Jenkins and the U-18 national team. I'll never forget putting on the U.S. jersey for the first time.

The ability to learn from mistakes. I believe this is truly what can make every single player in this world better.

The off-the-ball stuff that maybe is not seen on TV. That stuff can get pretty dirty.

Taking the criticisms and the suggestions from different coaches and trying to make myself better every day. I've always learned that regardless of what I do people are going to doubt me because of my lack of years playing before high school, but the ability to learn and be critiqued is what has gotten me to my fifth year in the league.

My service. I continue to work on making that part of my game better every day.

I have been fortunate enough to have some amazing coaches and teammates in my career. It would be very tough for me to single one out.

Nick DeLeon. He's someone who I can talk to and he knows he can come to me about any game. We critique one another constantly and push each other and that's why it's so easy to get along. We trust one another.

Working so hard all year in 2011 and making it to MLS Cup...and falling short. I'll never forget the feeling in the locker room after the game.

The game has the ability to change people's lives: an autograph, a picture, a jersey. Being able to put a smile on a kid's face is something that I will remember for the rest of my life.

Tough question because I have played with some great players: Geoff Cameron, Stu Holden, Brian Ching, Chris Pontius, DeRo, Pat Onstad, Mike Farfan. I'm missing plenty but those are the first ones that come to mind.

I would either hopefully be a lawyer or a teacher. Those are two things I think I'd enjoy.