The Florida native has established himself as a driving force in the New York Red Bulls midfield. And if he didn't play soccer he'd be a comedian. 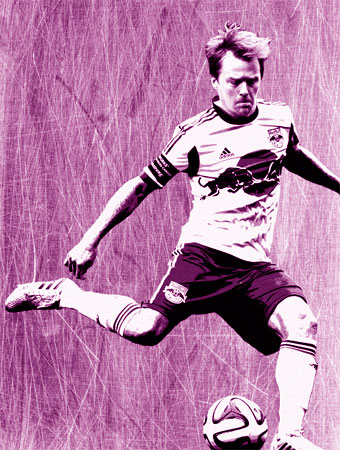 Playing on my first team when I was five years old and wearing shin guards without socks.

2009, against Slovakia in Slovakia. Pretty crazy atmosphere and I got subbed into the game down 1-0, and we ended up losing 1-0. So we didn’t score, but we didn’t concede either so you could say I was even.

The ability to learn from mistakes you’ve made in the past and get better from them.

My passing over longer distances.

I have numerous close friends that I still keep in contact with, but the one I go back to from our days in the Florida ODP system is Nathan Sturgis. We’re still close friends and keep in touch regularly.

Representing my country in the 2008 Beijing Olympics and winning the Supporter’s Shield.

Losing the 2010 MLS Cup Final and getting knocked out of the U20 world Cup.

With U-17 national team, we played in a tourney in France against France. Their three strikers were Benzema, Nasri and Ben Arfa. We lost 2-0 and that was flattering for us.

I’d be a comedian.

Being respected by your peers and by how many trophies you’ve won.