Real Salt Lake's goalkeeper doesn't let anything get in his way, on or off the field. 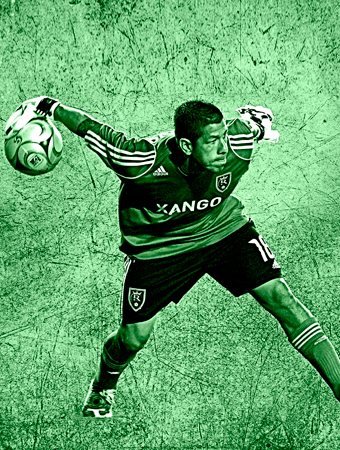 Playing AYSO and having headbands and wristbands to match my team colors.

I looked up to Tony Meola and loved watching Eric Cantona and Maradona.

It was a cool experience because it was in front of my home MLS team fans, but it was even more special because it was always a dream of mine to represent my country.

The willingness to work for the person next to him; an honest player that never gives up.

Hard work, never settling, and knowing you can always improve your game.

Accuracy with my left foot.

My dad. He taught me to never give up and to chase your dreams. If someone tells me I can't do something, he told me to go out there and prove them wrong. Thirteen years later I'm still playing pro after everyone said I wouldn’t because of my height.

I'd have to say Ben Olsen, Kyle Beckerman, and Carlos Bocanegra.

Losing the CONCACAF Champions League Final in front of our home fans to Monterrey.

Teamwork and being a leader.

Be in the music business somehow.

Respect from players around the league, and raising the trophy.