The six-foot-three Atlanta native is making steady progress for Southampton in the Premier League and progressing up the ranks of the U.S. men's national team. 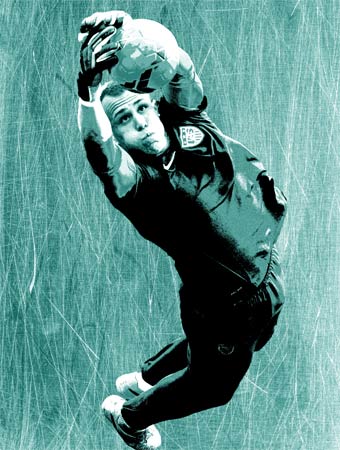 My earliest memory of soccer growing up is when I would go and watch the high school team my Dad coached, St. Pius X in Atlanta. One of the benefits of it being his team was that I was allowed to train with the team after school. The consisted of players such as Ricardo Clark, Mike Mecerod, Tommy Mauer, and Peter & Chris Island.

The one and only Captain Fantastic—Steven Gerrard!

I was playing for Thomas Rongen’s U-20 team in a tournament in Holland. The thing I remember most about the trip is when we played Senegal in a 0-0 draw and every single one of their players was as big, if not bigger, than myself. Itmade our team look like a group of midgets running around the field.

Hard work—I believe that without it as a player are nothing. Hard work beats talent when talent doesn’t work hard.

A talented player who is lazy.

Hard work, staying grounded, and never forgetting where you came from.

Consistency in technique with my left-footed distribution.

Both my Mom and Dad. Of course for different reasons but without what they both did for me over the years I wouldn’t be where I am today.

Representing the USA in the U20 World Cup in Turkey.

Losing to Mexico in extra time, 3-1, when we played them in the U-20 CONCACAF Championship.

You have to respect the game or the game will not respect you.

Mexico, Spain, France, and Ghana both in qualifying and in the U-20 World Cup.

Going to college in the U.S. and trying to figure out my future like every other normal 22-year-old.

Having earned the respect of both my teammates and opponents even after I retire.