The Green Bay native felt chills the first time he represented the U.S. Here is a closer look at the defender. 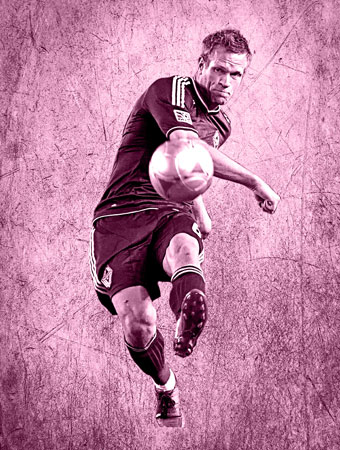 Putting on my purple jersey for the Howard Hurricanes back in Green Bay, Wisconsin, and playing with my youth team.

It was amazing. It was actually against Guatemala, and they had a guy I played college soccer against so it was a pretty special occasion. I was lining up against a former teammate down in Texas. I remember the chills I had when your national anthem comes on and you know that you're representing your country in an international match. We tied 0–0.

I like good competitors. I like guys that will show character to come back when things aren't going well and guys who are consistent in your game.

I think it's taking the best out of my opportunities and always showing the character to keep fighting.

My tricks. I don't have any tricks, so I'd like to learn at least one trick.

Probably a coach in Chicago, a guy called Bret Hall. He was instrumental in making me believe that I could be a better soccer player and play at a professional level.

Probably some of my U.S. teammates, like Stu Holden and Carlos Bocanegra.

Playing in the World Cup.

Not making the [English Championship] playoff final in 2008.

I think it's always being consistent in my personality and letting that represent who I am on the field.

I have a design degree for product design, so I'd probably be doing something in the design world.