The FC Dallas captain is now a card-carrying member of the U.S. men's national team pool. And he does a mean Napoleon Dynamite impression too. 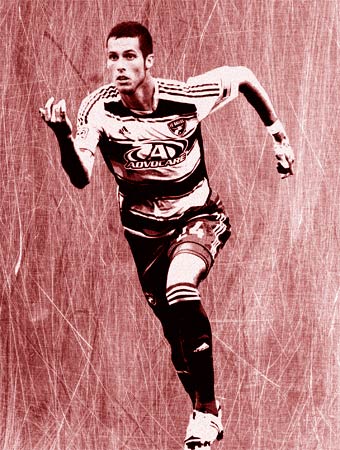 Oh man.... I don’t know how old I was but I remember playing in the winter when I was living in Philadelphia. It was freezing cold. I don’t remember exactly where we were by it was right next to this river and there was snow on the field. I was like ‘I’m never doing this again.’

My first game...for FC Dallas was against Seattle. It was here though. I was pretty nervous. Schellas [Hyndman] called me into his office the day before to tell me I was starting. In the game, I was nervous for a little while but once I got to playing, it went away. [As of October 2014, Hedges has not represented the United States.]

Discipline, I think, would be the quality I admire most. Working hard on the field is part of being disciplined. Being smart.

Not being disciplined. That’s frustrating to deal with.

I’ll say discipline, as my third answer in a row.

I have three: NCAA National Championship. No. 1 in the country—UNC. Getting drafted. Being Captain and when I was announced Captain.

To always work harder than everyone else.

This is a hard one because, do you pick the most talented or the player you would want to play alongside the most? Talent is a combination of a lot of different things. You could be talented with the ball but if you don’t work hard without it… I don’t know. It’s tough to find a player that I can say is fully talented. Kellyn Acosta.

Something related to my major—computer science. I’d be a software engineer—coming up with new apps or something.