The Philly attacker wants to improve his decisiveness in the final third. 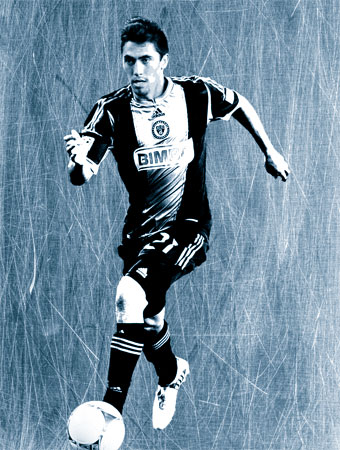 My earliest memory of playing soccer would have to be playing 1 vs 1 with my twin brother Gabriel in our backyard on the goal that my dad built us when we were like 4 or 5 years old. The only time we weren't playing was when my mom would force us to go inside and eat.

I remember watching Maradona the most and admiring the way he could take over the game singlehandedly. Then my dad mentioned Michael Laudrup and he instantly became my favorite player to watch.

It was with the Under 17s, I couldn't believe I was on the field representing my country. I had goosebumps as they played the national anthem.

Laziness. It's not fair to every other player on your team who is giving their all for the good of the group and you ruin it for them.

Taking more shots on goal. I tend to look for the pass before the shot more often than I should.

My dad. He's been my personal coach since I was a four years old. He has always done a really good job of teaching me what I'm doing well so that I can keep doing it and what I need to work on so that I can change it or do it differently.

My brother Gabriel and Eric Avila. Gabriel and I have been side by side since we were born, and are fortunate enough to still be able to play together on the same team. Eric Avila grew up playing on the same club team as me and our families are just as close.

I don't believe in luck. I believe with anything that what you put into it is what you will get out of it, and the harder you work, the more opportunities you will create for yourself.

Carlos Ruiz and Brian Carroll. Carlos Ruiz is such a smart player, has a great touch, and knows how to use his strengths and weaknesses to his advantage. Brian Carroll is such a great/underrated player. He does all the dirty work so that the guys in front of him can reap the benefits. He's a true team player that never gets the acknowledgement he deserves

Mesut Ozil and Eden Hazard. Ozil is so smooth on the ball. He never lets you get near him and always knows what he's going to do with the ball before it gets to him. Hazard is such a quick, strong, savvy player that's really hard to stop with the ball at his feet.

I would probably work on a boat as a fisherman. Most likely in St. Thomas, where my girlfriend Pualani is from. There's no feeling better than being on or in the water. It's such a peaceful place.

Gaining the respect of all the players you play alongside. Nobody knows your worth as much as the players wearing the same jersey as you.