The tall Texan moves well off the ball and fills up the goal sheet for the New York Red Bulls. 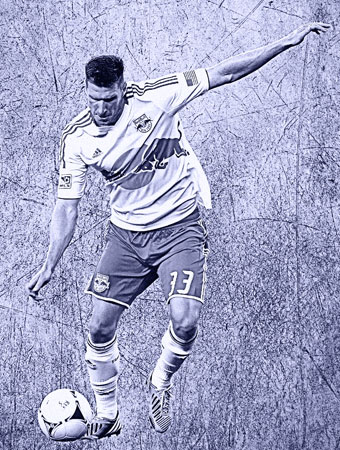 One of my earliest memories playing is in recess at school. My father was a professional coach when I was young, so I had a passion for the game at a young age and it’s always been something that I’ve loved doing. I remember even in elementary school, playing with my classmates during recess.

The Brazilian Ronaldo was a big-time hero of mine growing up. I would probably tie my shoes like him, the same way he was doing it.

It was an incredible honor. I came off the bench and it was great to get on the field. We won the game. I had my wife and family in the stands. It was just a really special memory and an incredible honor to be able to share with them.

Two of the qualities are effort and determination. I love seeing guys out there who are giving it their best, working hard, and it’s something I really admire in players.

I feel very fortunate and very lucky to be able to be a professional. I’ve practiced a lot throughout my life but I’ve also enjoyed it. I think that when you go out there and train and you’re enjoying yourself, you might get the most out of it.

My flick-ons. Heading the ball. Hopefully that’s something I’ll continue to work on.

My parents have been incredibly influential in my soccer career and throughout my life. They have always supported me. They’ve encouraged me and believed in me all the time. It’s something I appreciate so much. I hear their voices inside my head, and it’s voices of love, encouragement, and support. I appreciate that so much.

One of my closest friends is Stephen Keel. We’re roommates on the road, so I’ve had a lot of fun and really enjoy my time around him.

One that stands out is just playing for the national team. It’s just an incredible honor. I’ve had a few opportunities to do it and hope for some more in the future.

I’ve had some injuries along the way that have kept me out for a long time, but you know, that’s obviously the reality of the game. I think through that you can come back stronger and better.

One of the things is to be resilient. I feel very lucky, and I’ve had some really amazing experiences in the game. I’ve had some tough ones, but I think it’s important to stay resilient and keep going and keep fighting every day. Give it your best. Some of my greatest moments in the game have come after some of my worst. So I think it’s important to be resilient during tough times.

Obviously, on the Red Bulls we have Thierry Henry, Rafa Marquez, Teem Tainio—we have so many great players. I’m eager to improve and get better. Playing around these guys and being able to watch them on a daily basis is just a great environment for me to be in—or for anyone to be in who wants to get better.

Maybe in school. I really enjoyed school and studying. I enjoyed that academic environment, and I think if I wasn’t playing I would enjoy being back in the classroom.

I think winning a championship is one mark of success. I would love to win an MLS Cup. It’s something I’m eager to do. My father has a championship ring from when he played in the NASL. I’m very jealous of him and I’d love to have a ring myself one day.