The netminder explains the importance of keeping on-the-field and off-the-field issues separate. 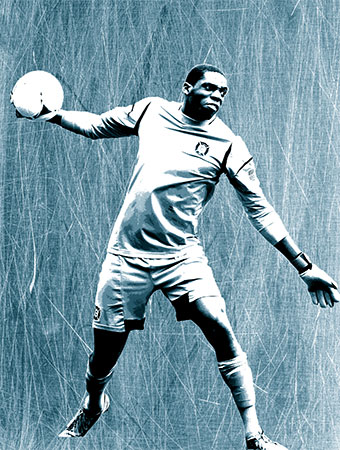 When I was maybe six or seven, on Sundays I would watch my dad play in the local leagues and I would just kick the ball around while watching them.

It was definitely special to represent your country. It was against Chile for the first team out at the Home Depot Center in 2011. It was a very, very special experience. It’s really hard to explain the emotions associated with your first cap for your country but it’s definitely one I’ll always remember.

Determination. Whether it be defensively or offensively, just having the will to close down every shot, stop every shot, score every goal. Determination is something that can’t be taught but comes from within.

Being passive. I hate players who are passive, when they don’t show aggression or passion in certain situations. Soccer is a game where every moment there is a difference between being calm and being passive. But I think being calm while still having a bit of urgency about what you’re doing is very important as a soccer player.

Hard work and dedication to getting better. Just working every day, every day in training and every time I get in the game to make myself better and learn from situations and knowing that your potential is never fully reached and just keep striving to get better and better.

As a goalkeeper, every aspect of my game can get better so I just look to work every day to make sure that I’m building and not really specifically focusing on one aspect of my game but my game as a whole to raise all levels to make myself the best player I can be.

I think my mom. You have good coaches along the way, good mentors along the way, but my mom is always in my corner, she has always been there since day one so she knows me better than anybody. She’s helped me more so grow as a person as well, not just as a player. Your qualities off the field reflect and show what you’re made of as a player at the end of the day.

Kwame Watson-Siriboe. We lived together for two years. He’s like a brother to me.

Being a part of the team that beat Mexico in Mexico.

Not qualifying for the 2012 Olympics.

Not to tangle your personal life with your soccer career. That being said, anything good or bad that’s happening outside of soccer, you don’t want to let that affect your emotions on the pitch. You want to be levelheaded, always be consistent and have the same demeanor when you’re on the pitch. Everything that happens off the field is separate and you deal with it accordingly.

If I could stay in sports I would either be playing basketball or doing some type of racing, like driving an Indy car. Outside of the sporting world, I would say probably be an accountant. A CPA.

I think everybody has their own personal goals and success is defined person to person, but I think the overall benchmark for me would be first and foremost, winning a championship with the Chicago Fire. And hopefully one day playing in Europe. Ultimately being happy, making sure my family, more so than anything, is taken care of. Once my family is good, I’m good. I think that’s when I can say I’ve become a successful soccer player.