The consummate captain talks about the importance of a good attitude and trying to improve. 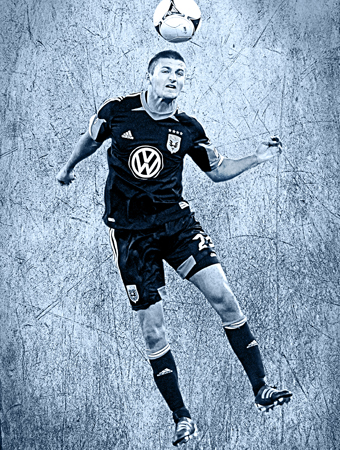 Probably kicking the ball around with my brother in the backyard when I was about five.

That was probably when I was at U-14. It's great to put on the crest and represent your country. It’s a great honor, and I think everybody feels the same way. It’s a special feeling, and you can’t really explain it.

Working hard and always trying to get better. The best players in the world probably say that they really feel like they have never arrived, that they can get better. I try and do the same thing. I have a lot of work left to do but trying your best every day will help you get better.

I’d say my dad. He would always evaluate my performances and give me an honest answer on how I did.

I don’t necessarily think I have a best friend in the game, but I’d say most of the Akron guys here in the league. We stay in touch, and we’re all pretty good buds.

Hopefully that’s to come. We’re fighting for the playoffs, and I think that would be one of my greatest achievements. The national title at Akron was very special, too.

Have fun. You want to take it seriously, and work hard, and win—that’s the goal. But some days don’t go your way. You can’t take it personally. You need to get out there and enjoy it because one day it will end.

I would say Darlington Nagbe at Akron. He’s a special player and has great qualities. I think he’s really going to explode. I’d also say Brek Shea at times with the Olympic team.

I would have to say probably Thierry Henry. He’s a very smart player. He’s good on the ball and he knows when you are going to pressure him.

I’d probably still be in college at Akron, studying and taking classes.

I’d say going out every day and giving your best. There have been very successful players who haven’t necessarily had all the trophies or accolades, but they have gone out and tried their best and given everything they had every day. I’d say that’s the best definition of success in the game.