When the Orlando City SC defender first played soccer at age three, he didn't take to it. But thanks to his dad he stuck with it. 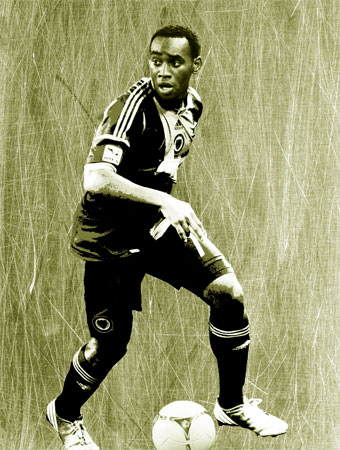 My earliest memory would be when my dad took me to the park when I was 3 years old and had me running with the ball doing different drills and stuff. I remember crying and pouting but he kept me out there until I finished.

My soccer hero growing up was Nwankwo Kanu. He’s one of the best players to ever come from Nigeria and I remember watching him with my family in the 1996 Olympics, leading Nigeria to the Gold against Brazil. Michael Essien and Makelele were players I admired growing up too. I remember watching Chelsea play and trying to emulate their game when I was on the field.

My first experience suiting up for the USA was at the very first u-14 camp for my age group in Boston. I was carrying a lot of emotions. I was so proud and honored to be representing my country of birth, and to be recognized for my talents. I was also very nervous because there were so many good players there and I wanted to make sure I was one of the best players. I knew I would have to continue to improve and get better in a lot of areas to be fortunate enough to get called in again for the national team.

Vision. I really admire players that are able to thread the needle with a pass or a no look 60-yard ball switch to a winger. To be able to see a pass before everyone else and then have the confidence and technique to play it is a quality I admire.

Flopping. I absolutely despise flopping. To try and cheat your way to earning a call or winning the game by flopping is what I dislike the most in a soccer player.

A lot of things are key to your soccer success. I think discipline is the most important. Being able to take care of your body, constantly analyzing your own game, and knowing what distraction to stay away from requires the necessary discipline to help your soccer career become successful.

There are a number of things I want to improve on. Aerial game especially if I’m dealing with big forwards and long distance shooting if I’m playing center mid are two things I would like to improve on.

I can’t single out one particular person who had the greatest influence of my development. Both my parents played a key role in my development not only with advice but the sacrifices they made. Coach [John] Hackworth bringing me into residency to play with the best players on a daily basis really played a big part because it made realize soccer was what I wanted to do in life. All my club coaches growing up also helped as well.

Kofi Sarkodie from Houston Dynamo is my best friend in the game. Jack McInerney is also a very close friend because we came into Philly together and are always roommates on trips. Joe Gyau is also a close friend but it’s harder to keep in touch with him since he’s in Germany.

Honestly, I don’t think I can answer that right now because I still, God willing, have a lot more years in my career. Probably being drafted in 2010.

Not qualifying for the U-20 World Cup. We had a very good team and good group of players. We lost to Guatemala in Guatemala and it was very unfortunate.

Learning how to deal with adversity is the most important lesson I’ve learned from the game. Things may not go your way all the time but if you keep a positive head and work hard you will get your chance.

One of the most talented teammates I’ve played alongside would have to be Fred. He was so good with the ball at his feet and never lost his composure no matter how many guys were on him. Carlos Ruiz was another player that was very good. His finishing ability and hold up play are second to none.

As a center back, I’d say dealing with Robbie Keane was very tough. His off-the-ball movement is excellent. You get a headache just turning your head to keep track of where he is. As a center mid, Osvaldo Alonso was tough because when he is on the field you never really have time on the ball. His tenacious play can frustrate you if you’re not on your A game.

I would probably be doing something in relation to business. My major was business administration while I was at UCLA and I still am taking classes right now planning to get a degree in business administration. I played basketball up until I went to residency, so I’d like to think I could have played in the NBA.

Playing in a World Cup, playing for team that is consistently competing in Champions League, and winning a trophy for your club would be my barometer for a successful soccer career. But there’s more to soccer than just personal goals so my ultimate definition of success in the game would be inspiring someone else to want to emulate their game after you because of the way I carried myself on the field.