The Houston Dynamo striker discusses his big ambition, perseverance, Didier Drogba, and the toughest opponents he has lined up against. 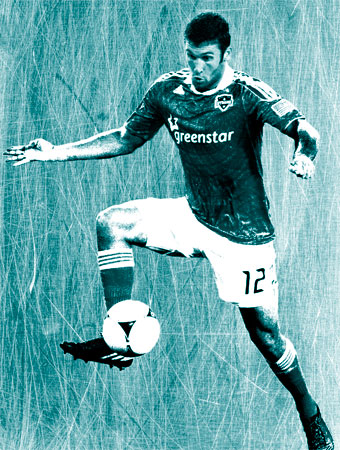 Probably making the varsity in high school as a freshmen. That’s probably the main thing that sticks out. [It was the] beginning of being a little bit more serious about soccer. Coming up through the ranks I just played soccer to kinda just play. Being a freshman and starting that first varsity game, our conference was a pretty good conference, I thought it was pretty cool that our coach put me in the first game of the season and started me. It gave me confidence that maybe I could keep doing this.

Drogba. I’ve always liked Drogba but since he left Chelsea, kinda eh. I liked to watch him play, liked to watch the Ivory Coast cause of him. I think he’s a complete striker. He's big, strong, powerful but he also has a finesse about his game, which says a lot about him. He can be a big target forward but get behind defenses and is good with the ball at his feet.

It was awesome. It was a good camp. It was good to get your name out there and play and be able start a relationship with the coaching staff and get to know the people involved in the whole program and then be able to wear the jersey especially at the home stadium at BBVA in front of the Dynamo fans is something that I’ll never forget.

Technical ability on the ball—first touch, trapping, and passing is something I’m always trying to improve. You can never have too good of a first touch.

Being too predictable. If you’re a striker, you can’t do the same thing every time people are going to catch on and just defend that. You've got to be creative. You've got to be able get past the defense and put balls in the back of the net.

Determination. I’ve been told a lot that I was not really going to make it—too big, too slow, all this stuff. But it’s fun to prove people wrong sometimes.

There’s two. First touch. But I also want to improve my left foot. That’s something I want to work on a lot more this year. I don't want people thinking I'm only a one-footed player.

Luis Soffner and Tommy Meyer. I played with them at Indiana. Luis was my roommate all three years I was at IU and he actually got drafted by New England this year so good for him. And I played against Tommy in the MLS Cup. I thought that was pretty cool because we were in the same class at Indiana as well and then playing against each other on opposite teams in the final was something special.

Getting a cap for the game against Canada.

Probably getting to the MLS Cup twice and losing them both.

Perseverance. Not everything’s going to go your way and how you handle that adversity kind of makes you the player that you become. You have your ups and downs. It is a long year. Not everything’s going to be perfect, but you've got to be levelheaded and fight through it. You can’t get too mad when things aren’t going your way or too down on yourself, but you can’t get too happy when things are going your way.

I’m trying to finish up my degree in exercise science, but I’ve been thinking maybe I should’ve got it in psychology. After my soccer career, I would like to get into coaching. I’m a competitive person. I like being around sports. I like the environment of a team and the camaraderie. It’s kinda like a family setting. That’s something that’s pretty special, and that’s something I’d like to stay around.

Winning championships [and] representing your country—those are two big things. If you can be lucky enough to have both opportunities, that’s about the biggest honor you can have.