The veteran midfielder, now back with the Dynamo, talks about what he's learned from the game. 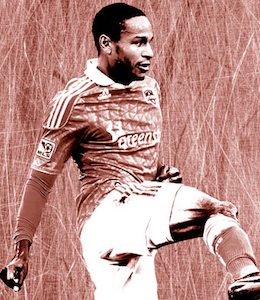 [At age three, four, or five] playing in the backyard of my house with my dad and my brother. I grew up around the game and that was the first place I used to play.

Pele. My dad introduced me and my brother to this VCR tape, Giants of Brazil. It was about Pele and Brazilian soccer and it also had a piece on the 1970 World Cup. I used to watch that tape over and over. It showed all his moves and his career. It was a really cool video to watch.

My first cap was in 2005 against Panama [in Foxboro on October 12]. It was a qualifying game. It was a pretty cool experience. To be honest with you, I didn’t really know what to expect going into it. It was kinda like a blur, man. I think I got in like the last 20 minutes of the game, so I was thankful for that. The coach was Bruce Arena at the time. So yeah, It was pretty special being able to to share that moment with some of the best players in the country.

The ability to beat players. Not only one player, but three, four, five players like a [Lionel] Messi or Cristiano [Ronaldo] does. I think that’s rare to find in this game. When you have a player like that, they're ususally on another level, especially when they're doing it at a high level, so that's pretty cool to see and entertaining.

Somebody who whines a lot and complains about everything on the field.

Perseverance and determination. I think every player goes through high and lows in their careers, which I have. That’s been going on since I was playing in rec soccer/youth soccer, so just being able to push through the good and the bad times.

Free kicks around the goal. I've never really done that. Sounds kinda fun to be involved in. Maybe one day, who knows?

My dad has had the greatest influence on my soccer game just because he introduced me to the game. He coached me until I was about 12 years old.

You know what? I would say my five-year old son. He likes to play. He sees me playing, and he likes to do the things I do on the field. Back when I was playing more defensive roles, his dream when he would step on the field would be to be a defender. Even though I like to see him go forward and score goals, he wanted to be a defender. He wants to watch every game. He wants to be a part of everything I do when it comes to soccer.

Losing to Ghana in the World Cup. We had done so well leading up to that and just to kind of fail in that game was really disappointing. But it made me hungry for more, for another chance to do well in a World Cup.

I’d say never take anything for granted. I have been lucky, been blessed, to have a pretty good job. A lot of people wish they were in my position to play for a living. I just want to go out and try to make the most of my situation, not only every game but each and every day each and every practice. Just put in the work when I can. As I get older, as I get more experienced, it just all comes with the territory. I think going through youth systems to college through my proffessional to MLS to Europe back to MLS, national team, when I look at all the players that didn’t make it and I look at myself and see where I am, it makes me believe I’m here in this situation for a reason. A lot of people wish they were and aren’t. When I see all the fans supporting me and whatever team I’m with, and I see all the kids especially looking up to us, my own kids looking up to me and the rest of my temmates, it makes you recognize that and realize that and it makes you feel even more special.

Right now, I’m studying exercise science, so I eventually want to be a strength and conditioning coach either for youth players or even at the professional level. [I want to] pass on what I’ve learned and what I think can improve other players in regards to strength and conditioning. In 2006, I gained an interest in nutrition and the body, and it just kind of developed and evolved. I just wanted to learn more and pursue a career in it.

Doing what you feel on the field and in life, and not worrying about what other people think.