The creative midfielder dishes on his former teammates at Tijuana and his surprise best friend in the game. 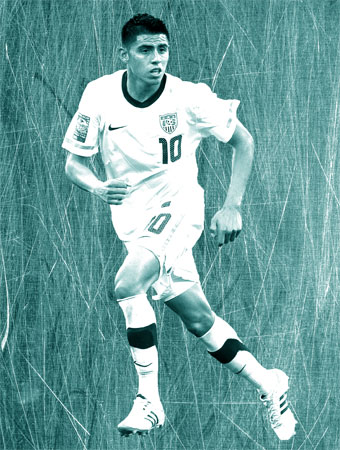 I used to live in this place called La Gloria, just outside of Tijuana, and that’s where I first started playing soccer. I was 6 years old. My mom and this other lady started a team, and that’s how I started getting involved in soccer. Dirt field. It was a good time.

I grew up watching Ronaldinho. Before that, Zidane, because he’s a 10. I always watched him play.

It was an honor to be able to represent the U.S. My first appearance was with the U-23s. It was a good experience. I try to enjoy it, try to take advantage of it. It was a great feeling.

I’m very technical, so that would be mine.

Dirtiness. There’s some dirty players out there.

The belief that I’ve always had since I was young: keep dreaming. And practice. The way you practice is the way you play.

My family, my parents. They always exported me to practices and games. I never needed anything because they would always try to give it to me. They’ve always been there, so I think I owe my success in a way and thank them. I thank God for everything, for having the privilege to be here.

Being promoted to first division. That was my greatest achievement as a professional player. Being called up to the national team was very special to me.

Not qualifying for the Olympics.

Stay humble. That mentality has given us a lot of success this season. We don’t think we’re the best. We try to stay humble, and that’s very important. I think it happened with the U-23s qualifying. We thought we were the best team out there and you never know. You can get embarrassed by any team, so that’s the lesson I’ve learned.

[Landon] Donovan and [Clint] Dempsey. Here at the club, [Edgar] Castillo. A lot of people here have potential, and you can learn a lot of things. There’s a lot of talent in Xolos, and you gotta exploit all of that.

I have no idea. When I was growing up I dreamed of playing soccer and never saw myself doing something else. I’d be working in the States. Before joining Xolos, I was going to San Diego State, so I’d probably be in my career now.

Hard work, always believing in God, being close to family, always trying to give it your all. I think that everyone who plays soccer will always have an opportunity if they look for it, but it depends on whether you take that opportunity.