The forward is strong, physical, and fast, but can he make an impact on the international level? 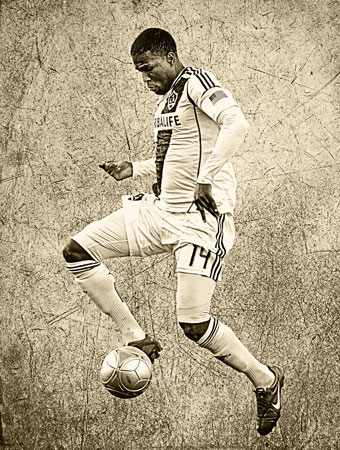 Playing with kids on the side of the field when my dad was playing. It wasn't organized.

My first time with the youth team was more exciting, I think. I was younger, so I built it up in my head. I was 14 against Norway in Slovakia.

Scoring goals. It's not easy.

Doing the little things. Preparation and preparing the right way.

I can always improve my left foot. I can use it, but it can get better.

My dad first. Then various teams, coaches, and peers after that.

At this point, I would say my teammates here on the Galaxy.

Dealing with adversity. When things are not going your way, that's what makes you the person you are. When you're injured or you get tackled, you have to get back up.

Landon [Donovan], one. David [Beckham]. Robbie [Keane]. They are all good players. Youri Djorkaeff. Brian McBride. Jeff Cunningham. There are a lot of good players I've played with. I've been fortunate. Clint Dempsey. [Laughs] Johnny O'Brien. Claudio Reyna. I could probably go on and on. I'm a fan of the game, so I like a lot of players.

England was a tough opponent in the World Cup. Brazil is tough. I would say Brazil over England. That was a really tough game.