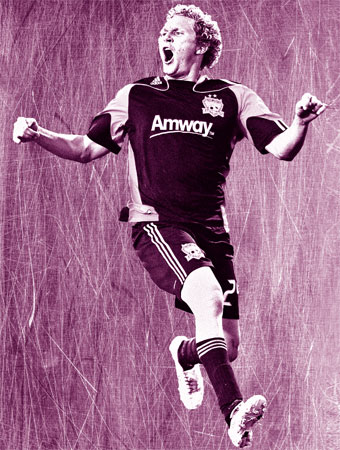 I was an assistant coach for my older sister’s youth soccer team. My dad was the head coach and I was the assistant coach, but I was only five years old. It was a lot of fun.

Lenhart has yet to suit up for the U.S.

I always admire someone who works hard day in and day out.

It’s hard to watch guys being soft and not giving their all.

I try not to take any days off and I always give it everything I have.

I would like to improve my finishing around the net.

My college coach, Phil Wolfe [at Azusa Pacific University]. He was really inspirational, knew the game well, and poured a lot of time into me and my development as a player.

I have a few, but Robbie Rogers [who I played with on the Columbus Crew] is a great friend.

I won the High School California Interscholastic Federation State Championship, as well as being named the most inspirational player on that team.

In college my team lost two national championships before we won one in my final year.

It’s about making relationships. Wins and losses happen, but the stuff that matters is making friends.

Adam Moffat. We played in Columbus together. Also probably Guillermo Barros Schelotto when I was playing for the Crew. And of course, playing with Wondo now.

I would probably be riding a motorcycle in Africa or Mexico.

Knowing that you gave your very best day in and day out and being satisfied knowing that.