The 2013 MLS Rookie of the Year talks about his earliest memories of soccer, the toughest opponents he has faced, and an inspirational quote from Tab Ramos. 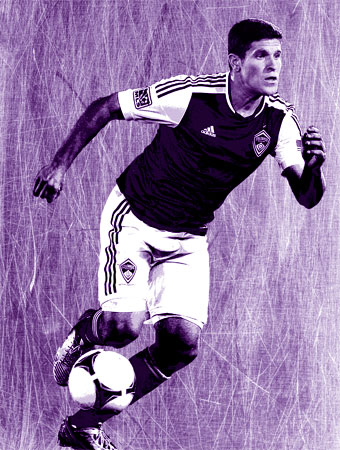 My earliest memory of soccer is lying on my back as a toddler and having my Dad drop the ball to me and I would do a bicycle kick.

My Dad because he was a professional player and I was able to watch all of his games.

I would go back to our first camp in Austin as a 14-year-old. It felt so cool to wear the kit that the full team was wearing. I think back then the jersey sponsor was Phillips. I was just so proud to wear it and it made me feel that one day I could be on the full team and play in a World Cup.

Watching the best with a purpose and learning from every experience, practice, or game.

There are quite a few I’d like to improve. I’d say my ability to beat people off the dribble.

Although he probably has no idea and I was only with him for three or four camps over the course of a year as an 18-year-old, I learned an incredible amount from [U.S. U-18 coach] Mike Matkovich on what it takes to get the next level and develop as a player. I’d have to thank Bobby Clark for helping me develop my ability to “take over” a game and really be a leader on and off the field.

My longtime friend Grant Van De Casteele who was just drafted by the Rapids this year. We have played together since we were 11 years old. The only year apart was the last one, when he took a fifth year at Notre Dame.

I think being MVP of the Colorado Rapids in my first year was my greatest achievement. It meant a lot to me coming from the guys I play with day in and day out.

Probably getting upset in the NCAA tournament my senior year in college.

Harry Shipp at Notre Dame and Vicente Sanchez with the Rapids

Mastery of your role.