For the 20-year-old forward, golddigging in Alaska will have to wait. 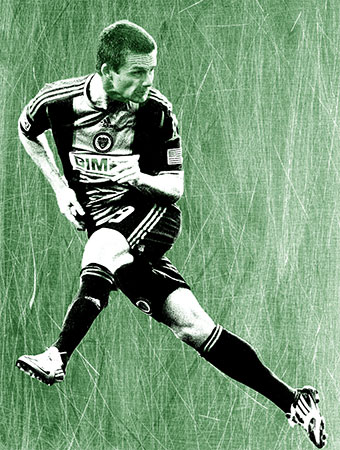 My earliest soccer memory was running up and down the field at around age six, kicking the ball with my Dad.

The person I loved watching most was Thierry Henry when he was at Arsenal. I have always played forward and wanted to score goals like him.

My first real experience was with the U-17 national team during the Nike friendlies against Turkey. A couple thousand people were there and it was my first international game on a stage like that. I was very nervous but actually did well in the game.

How smart they have to be. Good players must think one play ahead and it has to be done in a split second.

Fitness. Weakest part of my game and is never fun to work on.

Working hard. If you're having a bad day with the ball, it can all be forgotten with good work ethic.

Anything with my left foot. I neglected it as a kid and it could help me a lot in today's game.

My Dad. He always pushes me and has taught me how to push myself. You can always go out and mess around but if you don't push yourself you’re not going to get better.

Right now I would say Amobi Okugo. We have been together for the last three years, and even before then, on and off, during national team camps.

Losing in the second round in U-17 World Cup. I missed a penalty kick.

It doesn't always go your way but keep your head up.

Defenders Jamison Olave (New York Red Bulls) and Nat Borchers (Real Salt Lake). Not only are they big and physical, but skilled too.

Hopefully in Alaska digging for gold.