Brad Davis describes his unusual and slightly frightening first experience with the game of soccer and his growth as a professional player. 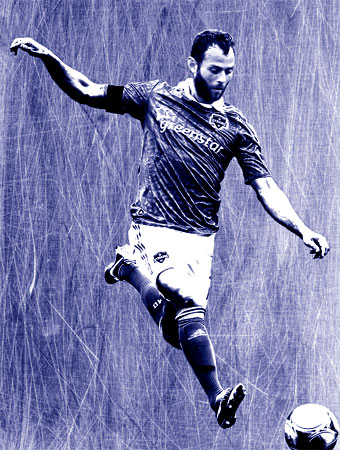 I remember when I was little, like still in my diapers, in the house that I was born in. My brother [10 years older] and his friends used to make me go in goal and they would just rip shots and have fun with little brother, but if I started crying, they’d turn up the radio and start singing so my parents couldn’t hear. It was awesome. I’m surprised I still play the game today—ha! It was just some fun brotherly love, I guess.

It was David Beckham. (In the background: "Booooooo!") My roommate Tally Hall is in here making fun of me right now. Obviously we didn’t win MLS Cup and that’s the whole point of it. It was still great to compete against a guy like that and then being able to play in some All-Star games with him and be his teammate. One of the biggest things I always say, it was kind of refreshing enjoying watching him play. He didn’t come over to take a break or anything. He came over to the league and made a difference as a player and really put his heart and soul in it. He believed and really wanted to make a difference and grow the sport here. As a player in the league, it was great to see a guy come over with that mentality and put everything into it.

Fantastic. I think when you’re younger and you first put that jersey on [Davis did with the U-18s] you don’t know everything that goes into it; everything that you’re playing for. You’re still out there with friends. You don’t understand everything that you are playing for. The first time I really put on the jersey for the full team was 2005 for the Gold Cup. Obviously that experience was fantastic. We won. Pretty cool. It was a great time and hopefully I get some more of those.

I guess mentality. The mentality we have around the Dynamo—nobody likes to lose. We have different players in different roles, but everybody knows those roles and doesn’t try to go out of those roles. You've got to believe and you've got to have the right mentality. It’s not necessarily going to be pretty but you have to continue to fight and scrap and do what it takes to win. The mentality of the professional.

Selfishness. Not being that team player. I think everybody goes through selfish periods where they don’t understand that what’s going on is for the better of the team. I think every player’s gone through that.

Having a bit of a strong mentality. Just like every player, I’ve run into a lot of roadblocks. I personally feel like I matured late as a player—really learning what it took to be a true professional. I’m glad I learned that, and I really felt like I learned that when I came to this club. Being coached by Dom and surrounding myself with the players that we have had we had on this team, I was in a good atmosphere with a group of guys that loves to work hard and is team-oriented. Learning that mentality to just to continue to push yourself, really. Don’t settle for what you’ve done cause you can always do more.

My youth coaches growing up. Man, that’s hard to say because I’ve learned so much in different stages. I think you’re always growing as a player. When I became a professional, coming to this team, Dom took a chance on a guy who was bouncing from team to team and has really gotten the best out of me. And he continues to push me.

Winning the Gold Cup in 2005 or either MLS championship in 2006 or 2007. Representing your country is one thing. I know that takes precedent over club stuff, but it’s still a great moment in my career.

Not qualifying for the Olympics [Athens 2004]. Being on that squad and having the opportunity to go to the Olympics, and then we lost to Mexico in Mexico and didn’t qualify.

I don’t want to be redundant, but being a good professional. Being team-oriented.

MLS is so freaking competitive that it could be anyone at anytime. I guess I would have to say playing Mexico in Mexico.

Surround yourself with a group of great friends. I think success comes with how your team is doing. There’s nothing better than working hard for an entire year with a group of your teammates to get to the final and then raising that trophy. It makes the whole year worthwhile. I think success is defined by the group that you’re with. And not having any regrets: that’s success.