The 24-year-old North Carolina native had a breakthrough year in 2013, taking the Colorado Rapids starting goalkeeper role and claiming it as his own. 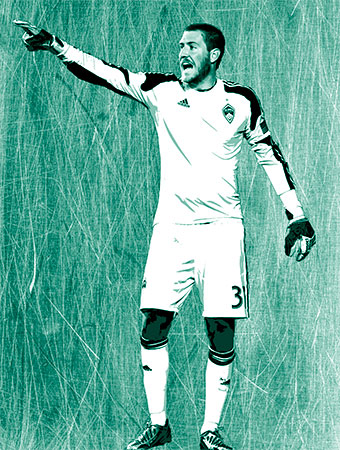 My earliest memory of soccer involves my parents taking me to the local YMCA on a crisp, fall day. Before the days of tight, long-sleeve under shirts, we had our white cotton turtlenecks to wear underneath to keep us warm. I remember we were USA and we had the white-and-blue checked jerseys.

I didn’t have one hero per se, but Ihree players that I really appreciated were Steven Gerrard, Xabi Alonso, and Edwin Van Der Sar.

Well, this has yet to happen at any level but hopefully I’ll be able to describe it soon!

Mental toughness is huge for players, especially goalkeepers. Mental toughness, in the sense that the player makes mistakes, but is able to quickly reset and become a blank slate. It’s a big part of being a professional at this level.

As a goalkeeper, it’s really hard to go up against forwards who can finish with both feet, can disguise their finishes, and can time their strikes in a way that you don’t normally see (hitting the ball in-between touches).

I feel I’m very strong on the mental side of the game. Tactically, reading the game and mental toughness are my strongest attributes.

Three coaches in particular: I had two goalkeeper coaches growing up, Bill Finneyfrock and Eric Hedinger at Charlotte United FC who invested a lot of time in my development and pushed me hard. They made me into the goalkeeper I am today. The third was my college coach, Darren Powell. He was the first coach who recruited me and encouraged me many times when I was thinking about giving the game up. He put his reputation on the line to try to get me opportunities. He always believed in me and we still talk regularly.

I’m not sure I have just one. I talk to guys I grew up playing with: Ike Opara, Steven Kinney, Danny Lovitz, and Gabe Latigue as well as staff that I’ve gotten to know at the places I’ve been.

So far, last season as a whole.

Getting rejected at trials seven times my first year as a pro.

Things change quickly. You’ve can’t let temporary setbacks derail you from your intended goal. Instead, use the setbacks as education and experience on your journey to where you want to go.

In the pros: Vicente Sanchez and Dillon Powers. In college: Steven Kinney and Justin Wyatt. If anyone saw Wyatt play, he scored some of the most outrageous goals I’ve seen to this day.

I’d likely still be involved in the game, either as an executive or technical director/GM.

Winning in a way that represents well—both your beliefs in the game and beyond it.