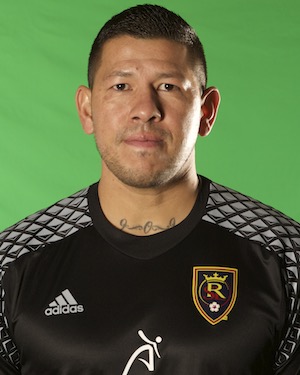 If the game goes to penalty kicks, you want Nick Rimando in goal.

Though small (five-foot-ten) by goalkeeper standards, the Real Salt Lake goalkeeper has an uncanny ability to stop PKs, evidenced by his back-to-back shootout performances at the end of the 2009 MLS playoffs. Rimando stopped three penalty kicks against Chicago in the Eastern Conference Final and then matched that effort in the MLS Cup Final, stopping three PKs against the Los Angeles Galaxy to get his team the win. Rimando was named MLS Cup MVP after that match—an easy decision for any who saw his sparkling saves.

Rimando played three years at UCLA before signing with MLS’s Miami Fusion in 2000. He made an early impact, starting 47 games in his first two seasons in the league. When the Fusion folded in 2001, D.C. United selected Rimando third overall in the allocation draft, and he continued to see steady work as a starting goalkeeper. During a whiplash-inducing stretch in 2006-2007, Rimando lost his starting role to Troy Perkins, was traded to Real Salt Lake, traded to New York Red Bulls, and then traded back to Real Salt Lake.

Now firmly ensconced as the starting keeper at RSL, Rimando has established himself as one of the best netminders in MLS. In 2010 he helped the Utah club set a league record for fewest goals allowed in a single season and logged 14 shutouts across 30 league games.

Rimando made his first appearance for the U.S. national team in 2002 but has always taken a back seat to the Kasey Kellers and Tim Howards of the world. That said, Jurgen Klinsmann called Rimando into his January 2012 camp and the keeper responded with a spectacular showing in a 1-0 victory over Panama in Panama City. Rimando was also named to the roster for both the U.S.'s “five-game series” team in May 2012 and for the historic August 2012 victory over Mexico in Estadio Azteca, but he did not factor in any of the matches. His breakthrough moment with the U.S. came in 2013 when he was the first-choice in net as the U.S. won the Gold Cup

That performance, along with a personality that's seen him emerge as a locker room leader despite his reserve status, earned him a spot as the No. 3 GK for the U.S. at the 2014 World Cup in Brazil. Now closer to 40 than 30, after having waited so long to finally get a shot with the U.S. Rimando doesn't appear ready to walk away from national team duty and his spectacular second-half showing against the Czechs in Sept. of 2014 shows he's still got plenty left in the tank. —JOHN GODFREY