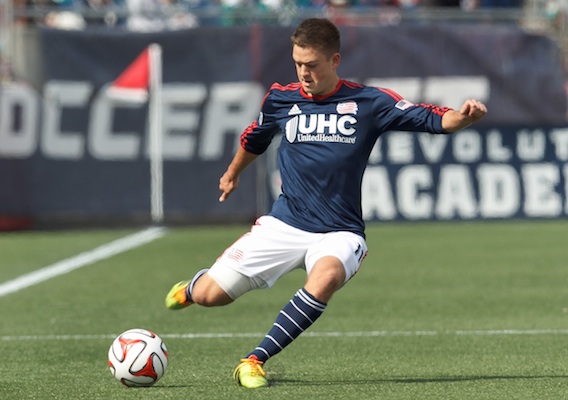 The 23-year-old New England midfielder is lethal from long range, but there's more to his game than that. Here's why Brooke Tunstall believes the Washington native should be part of January camp.
BY Brooke Tunstall Posted
December 28, 2014
5:27 PM
Editors note: A group of ASN staffers have created a 23-man roster for the January U.S. national team camp. Here is the 15th of 23 articles tied to every name on our list. ASIDE FROM THE FACT that it occurred in a crucial game against a loaded team in the world’s biggest sporting event, a big reason why Jermaine Jones’ monster blast against Portugal this summer was so memorable is because of just how rare it was for the U.S. national team to score on a long-distance bomb. Counterattacks and set-pieces, sure? The occasional well-placed cross or nice build-up? Yes. But blasts from about the edge of the 18 or so, those don’t just happen very often for the United States. Granted, they don’t happen all that regularly for most teams, which is why we tend to revere such goals and the people who produce them. And that brings us to New England Revolution midfielder Kelyn Rowe, a solid player with a cannon for a right foot and a willingness to use it from practically anywhere within the final third. In three seasons as a pro since leaving UCLA after his sophomore season, Rowe has scored 15 regular goals to go with 18 assists. American Soccer Now reviewed all 15 of Rowe’s regular season strikes and found that 10 of them are from at least 15 yards out, with most from beyond the 18. All 15 took place during the run of play. Here's a sampling: If someone in MLS, particularly an American, has scored more long-distance bombs during that time, we don’t know who it is. And that’s a big reason why Jurgen Klinsmann should include Rowe, who turned 23 earlier this month, on the roster for the U.S. national team’s annual January camp. Besides the golazos, Rowe also brings a nice level of versatility that offers Klinsmann some roster flexibility and makes him equally valuable as a second-half sub or a starter. Rowe usually plays one of the flank midfield spots—he’s right-footed but likes to curl in from the left flank to set up his shot—for New England but Revs coach Jay Heaps has also dispatched him as a withdrawn striker and attacking central midfielder. “He has a really unique skill-set,” Heaps said prior to MLS Cup. “He’s got good vision and can create but he can also get wide and run at guys. And obviously, he can shoot.” If the U.S. has reached a point where a 23-year-old with Rowe’s versatility and ability to strike from distance is surplus to needs, then the national team is far better than we realize. Clearly, Rowe has earned a look next month from Klinsmann.