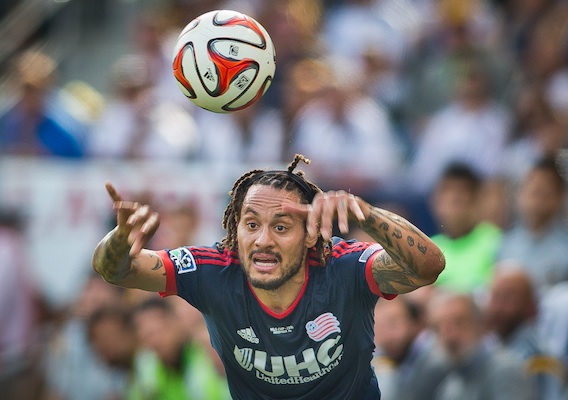 The Frankfurt native will be 36 when the 2018 World Cup in Russia rolls around—not the ideal age for central midfielders—so we applaud Jurgen Klinsmann's experiment to trial Jones at center back.
BY John Godfrey Posted
December 25, 2014
2:09 PM

14. Jermaine Jones
WE GIVE JURGEN KLINSMANN plenty of grief here at American Soccer Now, calling him out on the occasional disconnect between his actions and words, critiquing his tactics and player personnel decisions from time to time, and doing our small part to ensure that the American soccer media landscape does not consist exclusively of cheezburger eating LOLkittens. But we're not going to give the U.S. national team coach any trouble over his recent Jermaine Jones experiment. Try the lifelong midfielder in central defense? Why not? We love it. And January's extended camp will provide the perfect opportunity to see if the New England Revolution midfielder can make the transition and extend his national team career. Jones, 33, was the best American field player on the 2014 World Cup team and claimed the No. 1 overall position in the ASN 100 when Tim Howard went on sabbatical in August. He is a relentless competitor, has soccer smarts to spare, and can outrun players a decade his junior. But no athlete has ever won the battle with Father Time.

Jones will be 36 when the 2018 World Cup begins, and box-to-box midfielders tend to do more running than players at any other position. If Jones can acclimate himself to central defense, learn the intricacies of the position, and forge greater understanding with the likes of Matt Besler, John Brooks, and Omar Gonzalez, Klinsmann will have succeeded in easing the physical strain on one of his best players and giving himself options down the center of the pitch. And if Jones does move to center back, perhaps Michael Bradley will settle into the No. 6 role and get a chance to partner with a proper attacking midfielder—a Mix Diskerud or Lee Nguyen who specializes in combining with forwards. If Bradley instead moves into a more advanced central role (as Klinsmann seems to think he should), that frees up a spot for Perry Kitchen or Danny Williams or perhaps even Luis Gil in front of the back line. The possibilities are intriguing. And the stakes are incredibly low: If Jones can't make the adjustment during the monthlong camp, he easily slots back into the midfield and we wait and see how long his body holds up at a grueling position. Best of all, Jones will be a positive influence in January no matter where he plays—he brings nothing but superlatives to the team. Even though we are actively discouraging Klinsmann from bringing a bunch of 30somethings to January camp, we are happy to make an exception for Jones. Let the experiment continue. Thoughts? Like our team so far? Who else would you like to see? The remaining nine names will be released by New Year's Day. John Godfrey is the founder and editor in chief of American Soccer Now.