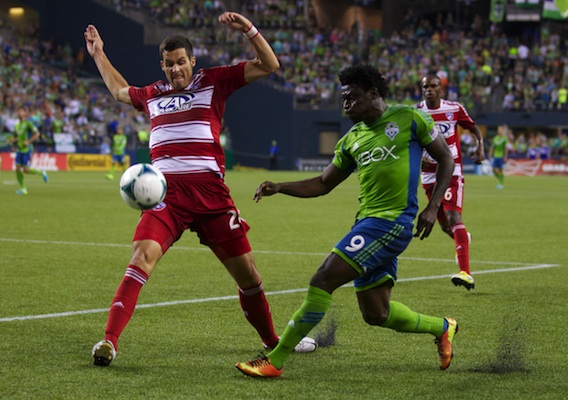 A commanding presence on the field with skill on the ball and aerial prowess to boot, the 24-year-old central defender is a perfect fit for January's U.S. national team training camp.
BY Brian Sciaretta Posted
December 22, 2014
10:42 AM
Editors note: A group of ASN staffers have created a 23-man roster for the January U.S. national team camp. We will be unveiling our proposed squad in the coming weeks and crafting arguments for every name on our list. UNCERTAINTIES ABOUND WITH with the U.S. national team right now, as should be expected. After the World Cup, a transitional period is only natural. In central defense, however, the problems are mounting. While John Brooks is playing well for Hertha Berlin, Matt Besler hasn’t quite been the same since returning from Brazil, Omar Gonzalez has never emerged as a consistent presence at the international level, and Geoff Cameron is earning minutes primarily in the midfield at Stoke City. Jurgen Klinsmann has given time to Jermaine Jones in recent games but that option is far from settled.

The bottom line? There are openings on the national team in central defense and Matt Hedges is at the top of the list of potential newcomers. There are some good young defenders in the league but Hedges, 24, is a cut above at the moment. He has three seasons of experience under his belt now and nearly 100 league appearances. It's easy to get excited about promising rookies like Steve Birnbaum but there is no substitute for experience. Beyond his experience, Hedges is also a leader—evidenced by the fact he was made team captain of a very young and talented FC Dallas team. The Western Conference was easily the better of the two in MLS and Dallas was able to compete very well against veteran teams like Seattle and Los Angeles. With those teams losing key players and Real Salt Lake breaking up its core, Dallas is in a good position to contend in 2015 and Hedges will be the cornerstone of that team. His skillset seems to stress what Klinsmann wants out of his defenders: Hedges can pass well out of the back and help in possession. He doesn’t make many mistakes and is very good in the air—both offensively and defensively. Everybody expects Matt Besler, Omar Gonzalez, and Jermaine Jones to receive call-ups in January and see minutes in central defense. But is that really good enough? This is the opportunity to expand the pool, open up competition, and perhaps uncover a gem or two.


Bill Hamid
Matt Hedges
Brian Sciaretta is an American Soccer Now columnist and an ASN 100 panelist. Follow him on Twitter.