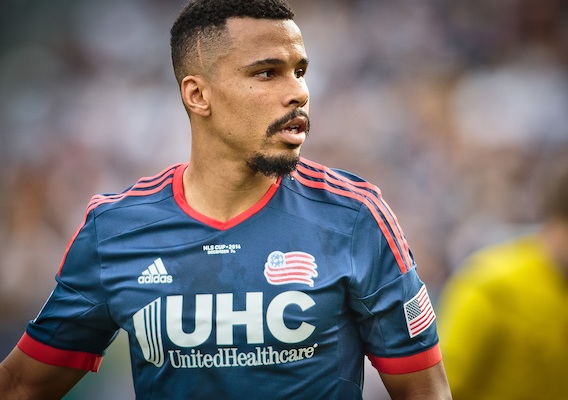 Charlie Davies Back With U.S.? We Think It's Time

The 28-year-old hasn't suited up for the United States national team in 1,899 days, but we think his second-half showing in the MLS regular season warrants a call-up to January camp.
BY Brooke Tunstall Posted
December 22, 2014
3:28 PM
Editors note: A group of ASN staffers have created a 23-man roster for the January U.S. national team camp. We will be unveiling our proposed squad in the coming weeks and crafting arguments for every name on our list. AS RECENTLY AS AUGUST the idea of a return to the U.S. national team for Charlie Davies would have seemed preposterous. Still less than 100 percent after the infamous car accident that derailed his career in the fall of 2009, Davies came to New England late in 2013 and was stuck on the bench. He then battled calf injuries during the first half of the 2014 campaign, which kept him on the shelf. But in late July his body finally allowed him to claim a consistent spot in the New England Revolution’s starting lineup and, playing as a lone striker in its five-midfielder formation, Davies began to show the form that once made him a rising star for club and country. In the final 14 games of the regular season Davies, 28, scored three goals and logged four assists—but that was just the warm-up for the playoffs. He registered four goals and an assist in five postseason games, leading the Revolution to MLS Cup. It wasn't just the goals he scored but how Davies scored them that suggested a return to his pre-accident form. He once again displayed the power and the audacity that marked his earlier career, an ability to score a goal with skill or pace and then follow that with a more unorthodox strike that was as much about will as skill.

The be clear, Davies still isn’t where he was before the accident. By his own admission he’s about 90 percent there and he may never regain that final 10 percent. But in the interim he’s learned to compensate and became more of a thinking-man’s player, timing his runs better and doing more stretching the field and holding the ball work—which was especially necessary playing as a lone striker. Not for nothing, it's an ability that would fit well with the way Jurgen Klinsmann often deploys his strikers. If Davies still has a role at the international level, it’s likely not as a starter. Going 90 minutes was still a struggle for him in MLS, after all. But in terms of a scoring option in the final 30 minutes of a game against tiring defenders, Davies presents a nice combination of skill, guile, scoring ability, and experience (17 caps, 4 goals). In this super-sub role he wouldn't have to consistently be Old Charlie to be effective, he just needs to be able to show it in a short bursts, and his play down the stretch and in the playoffs proved his skills are still intact. Finally, there are the intangibles. As has been well-documented, Davies would not have been involved in the late-night car accident if he had adhered to team curfew. No one is more aware, or accepting, of this than Davies. The ensuing struggles and knowledge of all that he has lost has left him with an amazing maturity and perspective while at the same time still being able to set an energetic tone with his naturally exuberant personality. Just about any locker room would benefit from a presence like Davies’—and a January camp locker populated with a number of wide-eyed youths could definitely benefit from his perspective. Despite his drive and maturity, a return to international soccer may yet prove a mountain too tough for Davies to climb. But part of what this camp is for is to experiment and see who can do what. It’s a perfect place to see if there’s a role for Davies to fill.