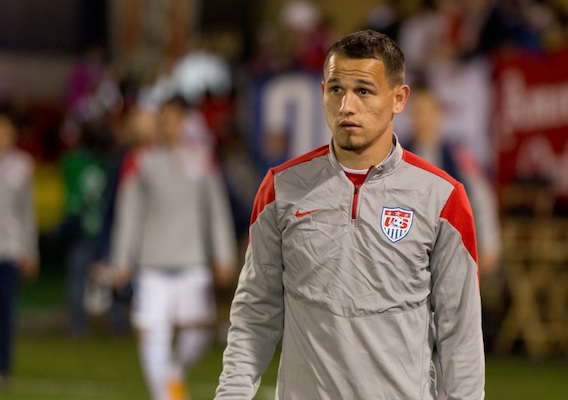 Still only 21-year-old, the Real Salt Lake midfielder struggled in 2014 but his thoughtful, skillful approach to the game may be just what the U.S. national team needs.
BY Brian Sciaretta Posted
December 22, 2014
1:26 PM
Editors note: A group of ASN staffers have created a 23-man roster for the January U.S. national team camp. We will be unveiling our proposed squad in the coming weeks and crafting arguments for every name on our list. WHILE IT IS ABSOLUTELY TRUE that 2014 was not the best year for Luis Gil, most of that is due to the departure of coach Jason Kreis. Real Salt Lake often lacked a sense of direction without its former boss, and Gil in particular seemed lost at times. The truth is that Gil is still one of the most talented young midfielders in MLS and his skill and passing ability remain at a very high level. The 21-year-old has 143 professional appearances under his belt, making him one of the most experienced young players in the pool. There is a bit of a misconception regarding Gil and what his role on the U.S. national team should be. Many people still recall his U-17 and U-20 days when he lined up as a No. 10 who advanced in the attack and frequently took on defenders with an arsenal of tricks with the ball. That's not his game anymore. Gil is more of a John O’Brien or Claudio Reyna-type who can hit great passes deeper in the field and help win the possession game for the Americans. Occasionally he can be an explosive offensive force but that is not his primary responsibility. The good news is that Jurgen Klinsmann could really use a player who fits that role. Right now, the midfield filled with players out of position. Bedoya isn’t really a winger. Michael Bradley isn’t a No. 10, Mix Diskerud isn’t a defensive midfielder, Alfredo Morales hasn’t quite fit in, and Joe Corona’s best position is not known either. If Klinsmann wants to invest in a project that could pay dividends over the long haul, he should give Gil a long look. The U.S. needs possession players who display a sense of purpose when they have the ball. Gil still has a lot to learn but his upside remains very high—if he is given the right role to play.