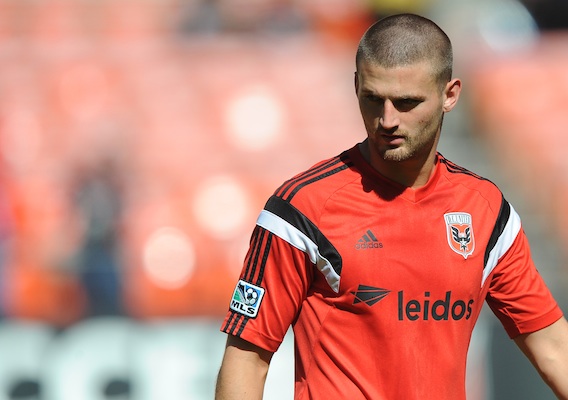 Perry Kitchen's Focus, Drive Should Get Him U.S. Nod

D.C. United's 22-year-old central midfielder has 125 professional games under his belt, but he has yet to make an appearance with the U.S. senior team. We say that changes next month.
BY Brooke Tunstall Posted
December 23, 2014
10:11 AM
Editors note: A group of ASN staffers have created a 23-man roster for the January U.S. national team camp. We will be unveiling our proposed squad in the coming weeks and crafting arguments for every name on our list. IT'S NOT EASY for a young holding midfielder to crack the U.S. national team lineup. For a second straight World Cup cycle Michael Bradley should have one of the two central midfield spots on lockdown for most games. And the depth is such at the position that, by American Soccer Now’s count, there are 12 capped Americans* besides Bradley who started at defensive midfielder in Major League Soccer this season. And that doesn’t even include European-based players like Geoff Cameron, who started a World Cup game in holding midfield this summer, Danny Williams, or up-and-comers like Alfredo Morales and Emerson Hyndman, who have gotten looks at holding midfield from U.S. coach Jurgen Klinsmann. That goes a long way to explaining why promising youngsters at the position who turned pro early and carved out consistent starting spots in MLS—like Amobo Okugo of Philadelphia and D.C. United’s Perry Kitchen—have yet to get a look from the U.S. national team.

Well, in Kitchen’s case, that should change next month. At 22, Kitchen is still younger than some of the players who will be picked in January’s MLS SuperDraft. He has already played 125 regular season games in his four professional seasons, and this year he emerged not just as a young player learning the ropes on a bad team but a key player on one of the best teams in the league. Serving as the link-man between United’s backline and attack, Kitchen was a key reason United tied with the champion Los Angeles Galaxy for the stingiest defense in MLS (1.08 goals allowed per game) while winning the Eastern Conference regular season by four points. Despite doing most of the grunt work to break up opposing attacks, which led to 65 fouls and 11 yellow cards this year—both second in MLS—Kitchen still managed to be a key cog offensively, posting career highs in goals (five) and assists (four). This fall United coach Ben Olsen told American Soccer Now he had spoken to Klinsmann about Kitchen and expected him to be a part of the January camp. “As good as he’s been, I don’t think he’s done getting better,” said Olsen. “I think he has a whole ‘nother level.” Besides his toughness and ability to play both sides of the ball, Kitchen covers a lot of ground as he ranges from side to side to break up plays. And his ability, and willingness, to play as a solo defensive midfielder would free up the likes of Bradley (or more attack-oriented midfielders like Lee Nguyen and Mix Diskerud) to move forward with confidence. Then there’s this: Kitchen is a well-known homebody who spends his free time studying his craft. He’s as singularly focused about soccer as any player in MLS and his all-consuming desire to get better and win is exactly the type of personality Klinsmann says he wants on the U.S. national team. Between his standout season, his experience for his age, his ability to free up more creative players, and his focus on his craft, January should see Kitchen invited to his first senior national team camp. (*The 12: Jermaine Jones, Kyle Beckerman, Maurice Edu, Ricardo Clark, Brad Evans, Brian Carroll, Jeff Larentowicz, Sam Cronin, Logan Pause, Dax McCarty, Eric Alexander, Davy Arnaud.)