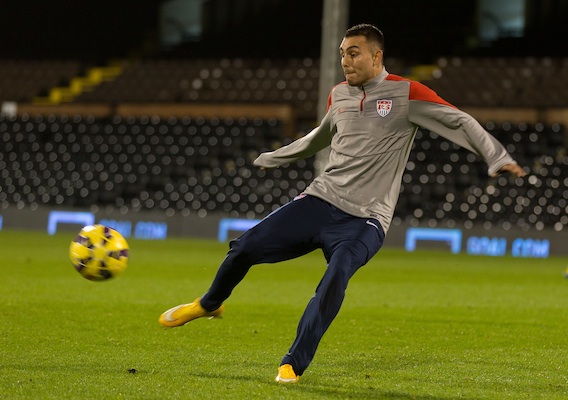 Let's Find Out If Miguel Ibarra Has What it Takes

The 24-year-old NASL attacker earned two U.S. national team call-ups late this year, but only saw a few minutes of action. January camp seems like a perfect setting to give Ibarra a longer look.
BY Brian Sciaretta Posted
December 24, 2014
1:57 PM
Editors note: A group of ASN staffers have created a 23-man roster for the January U.S. national team camp. We will be unveiling our proposed squad in the coming weeks and crafting arguments for every name on our list. JURGEN KLINSMANN HAS MADE his fair share of unconventional call-ups in 2014 but none, not even his decision to name Jordan Morris, was as puzzling as Miguel Ibarra. The Minnesota United attacker joined the U.S. national team for friendlies in October and November friendlies despite coming from the second-tier North American Soccer League. Over the four games, Ibarra managed to see just a few token minutes at the tail end of the 1-1 draw against Honduras on October 14. He did not play in the other three contests. Does he belong in the January camp? It's hard to say since so few have seen him play for a significant period of time, and he hasn't had a real chance against international competition. But Klinsmann initiated this experiment by calling up a second-division player, so let's see how it plays out. January camp seems like a low-risk opportunity to give Ibarra a close look, and it could benefit the player because he would enter into camp familiar with some of his teammates and Klinsmann's approach to the game.

Ibarra has a decent pedigree: he won the 2014 Golden Ball—which is what the NASL calls its league MVP award. He scored nine goals in 27 games for Minnesota United and combined well with Christian Ramirez, the NASL leading scorer and another potential Klinsmann target. Ibarra, 24, is a hybrid attacker who can play either out wide or as a supporting striker. He can create chances and his finishing improved in 2014. He is not afraid to take on defenders and he likes to play with flair. Whether he can elevate his game and be successful several levels above the NASL remains to be seen.