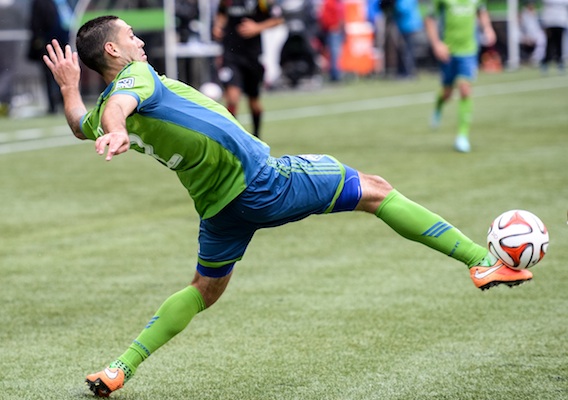 Clint Dempsey doesn't have to worry about Boxing Day matches or fighting for playing time, but the MLS star does need to think about January training camp—even at the expense of family or bass fishing.
BY Brooke Tunstall Posted
December 26, 2014
12:45 PM
Editors note: A group of ASN staffers have created a 23-man roster for the January U.S. national team camp. Here is the 15th of 23 articles tied to every name on our list. ON MANY LEVELS Clint Dempsey shouldn’t be in the U.S. national team’s annual January camp. After all, few have less to prove in American soccer than Dempsey, a veteran of three World Cups who scored a pair of goals for the U.S. this summer in Brazil, reaffirming his status as one of the best-ever American attacking players. And unlike several of his World Cup teammates, both in Major League Soccer and those abroad, Deuce didn’t have a post-Brazil slump. Dempsey logged six goals and six assists in 17 regular season games for the Seattle Sounders after the World Cup, one more in the playoffs, and scored the game-winner in overtime of the U.S. Open Cup final. But…. There’s always a but. Dempsey has also become an unwitting pawn in Jurgen Klinsmann’s squabble with Don Garber over whether the top American players should be testing themselves in more elite leagues abroad or helping elevate the level of play in MLS.

It’s a win-win for Klinsmann. If Dempsey shows up in great form, the U.S. national team boss has a dynamic and experienced striker on his hands. And if Dempsey is off, well, that will make Klinsmann’s case about the need for the top American players needing to play elsewhere—even if it might have more to do with Dempsey turning 32 in March, an age where many top attackers begin to slow down. Politics and age aside, Dempsey remains one of the top American players and deserves a call-up on merit, even if he doesn’t need the experience. At the same time, there’s also a leadership role for Dempsey to play; he's the older forward who can mentor the young up-and-comers like Gyasi Zardes just as Brian McBride and Josh Wolff once took Dempsey under their wing back in 2004 and 2005. Dempsey needs to show Klinsmann that age and MLS don’t prevent him from still being a key component of the U.S. attack and, if not, whether he can play, and accept, a lesser role. That’s what a January camp means for Dempsey and why he should be among the marquee names on the roster.