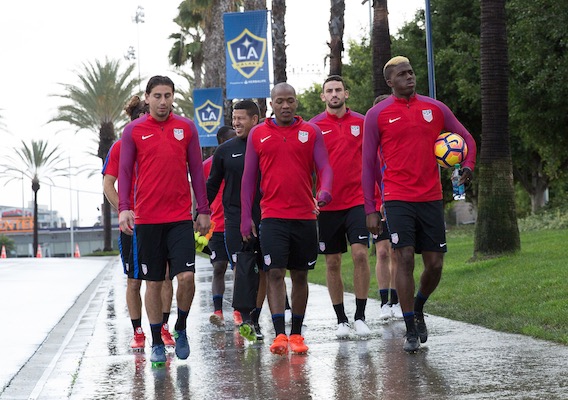 Bruce Arena knows he can't move heaven and earth during his month-long training camp in Southern California, but he should try to address, and answer, these five essential questions about his team.
BY Doug Sibor Posted
January 11, 2017
11:00 AM

THE DIRE SITUATION facing the U.S. men’s national team is all-too apparent as the Bruce Arena administration begins its annual January camp. With losses in its first two Hexagonal qualifying matches, the U.S. can’t afford any additional slipups if they want to have a place in Russia in 2018. The priority is points, and fast.

For Arena, the only two dates on his mind are March 24 and March 28; those are the days the U.S. will take on Honduras (in the U.S.) and Panama (in Panama) in the next set of qualifiers, and the Americans will need to take at least four points—and ideally six—in order to avoid a true crisis in these early stages of the Hex.

The manager knows this better than anybody. In a media roundtable at the end of November, Arena laid out the stakes as plainly as possible: “We’re fighting for our lives starting March 24th.”

While all of the players Arena called in for January are Major League Soccer regulars and many of them will not play a significant role in the upcoming qualifiers, there’s nevertheless plenty Arena can glean from the nearly month-long camp. Here are some of the questions the new manager and his staff should have some clarity on following the team’s friendlies with Serbia on January 29 and Jamaica on February 3.

1. Who can help this team beat Honduras and Panama?

In a Facebook Live chat last Thursday, Arena said that the clear priority over these four weeks is to identify who is going to help them get points in the Hex. While he’s known for being open-minded when it comes to who contributes, don’t expect to see Arena summoning a lot of new faces in important moments.

“When we get to March and qualifiers, we’re not going to be experimenting with any new players,” he said. “Our team is fairly set, there’s going to be some new faces along the way but I don’t think too many radical changes.”

Not all changes have to be “radical,” however. The U.S.’s lack of passing creativity out of the central midfield is not lost on the new manager, and Arena will hope to unearth an impactful No. 10 out of this January group. Three players—all of whom have at least some experience in the international game—figure to get a shot at filling this crucial role: Sacha Kljestan, Benny Feilhaber, and Darlington Nagbe.

Versatility will also be a privileged asset, and guys who can play multiple spots like Jordan Morris and Gyasi Zardes will also get a long look. Arena wants the identity of this team to be “aggressive,” so players who can bring pace and intensity to the pitch will have the best chance of seeing the field in March when the games really count

2. Is the goalkeeper of the future currently playing in MLS?

The U.S. started with five goalkeepers in camp but are now down to four after the oft-injured Bill Hamid withdrew on Tuesday due to a knee injury. While there’s plenty of quality in the remaining group, only 37-year-old Nick Rimando has more than two caps with the national team. Less-experienced goalkeepers David Bingham, Luis Robles, and Stefan Frei will all now have an opportunity to get a long look in camp and cement their reputation as players Arena can count on going forward.
Watch out for MLS Cup hero Frei in particular, as the Swiss-born goalkeeper will soon complete his eligibility requirements in order to play the Yanks. Who ends up between the sticks often depends on form, and it’s hard to argue anyone has been better recently than the as-yet-uncapped Seattle Sounder:

Arena did acknowledge that “Tim Howard and Brad Guzan have the edge at this point in time,” so even a brilliant camp by any of the five will not change who wears the No. 1 shirt in the immediate future. However, anointing a successor, and potential Hex backup, at what has traditionally been a position of strength for the Americans would be a major success.

3. How is Arena going to line the team up tactically?

Arena has long been a footballing pragmatist. His Los Angeles Galaxy teams rarely strayed from a standard 4-4-2 or 4-5-1, and it seems virtually certain that he’ll impart that same philosophy during his second go-around with U.S. Soccer.

In a not-terribly-subtle jab at predecessor Jurgen Klinsmann, Arena noted last week that, “We need to play a formation that’s compatible for the qualities of our players.” Nowhere is that more apparent than at the back, where the team came completely unglued against Mexico and Costa Rica.

“Clearly I think at this time we need to have a back four,” Arena said. “Playing three in the back is always an option at some point in time but in a short period of time like a January camp (and also a short camp in March to prepare for qualifiers) we wouldn’t do that. We’d play out of a back four.”

How they’ll organize the other six players in front of the goalkeeper and backs is a work in progress. In the past, Arena has always favored playing with two complementary strikers if possible; he’s got a potent partnership at his disposal in Bobby Wood and Jozy Altidore, and it seems likely those two will be the first choice up top again.

With youthful depth on the wings, Michael Bradley sliding back into his more familiar role as a No. 6 or No. 8, and Arena constantly harping on the need for a No. 10, the U.S. will likely be aligned in a traditional midfield at least to start.

4. Are the struggling regulars ready to return to form?

No established American player better represented the team’s struggles in 2016 quite like Bradley. While he played exceptionally well in the MLS Cup Final, he looked a shell of himself whenever donning his country’s colors last year. Now back in a familiar role and coming off his best game in quite some time, Bradley will need to rediscover his form if he wants to remain a factor in the national team picture.

Jermaine Jones—a favorite of Jurgen Klinsmann’s who also struggled last year—is another player who will quickly need to establish himself if he wants to play a part in the Hexagonal. At his best, the 35-year-old is a game-altering destroyer in the middle of the field and a critical component of the U.S. attack. At worst, his lackadaisical passing and penchant for ill-advised yellow cards cause him to hurt his team more than he helps.

In the short term, the U.S. really needs both of them to return to form and provide the experience and impact in the middle of the field that has too often been lacking.

5. Which veterans still have enough left in the tank?

Arena has called in plenty of players who are on the wrong side of 30 years old, and for some of them this will be their best (and likely last) chance to prove that they belong as part of the U.S. national team mix.

Graham Zusi will be making the move to right back, a switch Arena made both out of necessity and thanks to Zusi’s success there during a few appearances with Sporting Kansas City this season. In reality, with Christian Pulisic and (hopefully) Fabian Johnson locking down the outside midfield spots for the foreseeable future, Arena likely sees this as the only way for Zusi to show he still belongs in the national team picture. Speaking of converted wings now playing defense, DaMarcus Beasley is back in the mix at left back and may indeed find a role for himself as he seeks to play in his fifth World Cup.

There will be plenty of MLS veterans who haven’t gotten much of a look with the national team of late in camp as well, with age 30-plus players like Feilhaber and Chad Marshall coming off very strong domestic campaigns and hoping to ride that momentum into a spot on the national team roster after January. With 25 of the 31 players in camp already capped, it’s a group long on experience but with plenty to prove.

When he isn't playing or watching soccer, Doug Sibor enjoys barbecuing, snacking, and exploring all corners of New England. This is his first piece for ASN, and we encourage you to follow him on Twitter.