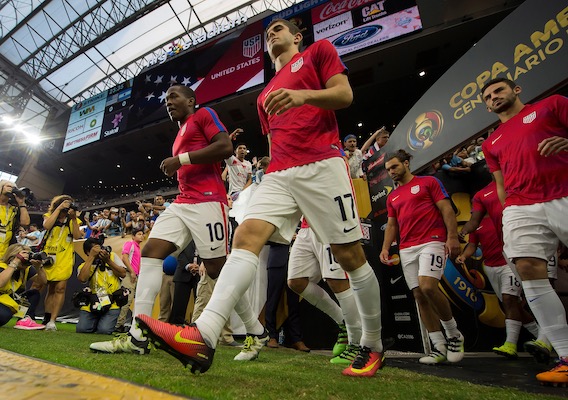 Who Will Be 'Other Winger' on U.S. National Team?

Bruce Arena will bring a daunting To Do list to this year's January camp, but his most pressing need is identifying the Other Winger on his squad—the player who will round out the Yanks' attack.
BY John Godfrey Posted
January 08, 2017
3:50 PM

BRUCE ARENA HAS DROPPED an inordinate number of clues regarding his plans for the United States men's national team—especially on the attacking side of the ball.

The 65-year-old coach has revealed that he holds Hamburg striker Bobby Wood in high regard; he believes that Christian Pulisic, a winger for Borussia Dortmund, is a major talent who should play a similar position for the Yanks; and during a Facebook Live chat Arena said that New York Red Bulls No. 10 Sacha Kljestan may have been the best player in MLS this past season.

Assuming for a second that U.S. captain Michael Bradley is an automatic starter in the No. 6 role, and Jozy Altidore, for better or worse, will start alongside Wood at forward, there is only one remaining attacking position that is a mystery for the U.S. national team: The Other Winger.

Fortunately for Arena, the team's annual January camp opens on Tuesday, providing him with a wonderful opportunity to assess his options at this position ahead of the two World Cup qualifiers in March. Here's a look at the leading candidates to fill the Other Winger role.

Considered from afar, the Borussia Monchengladbach seems like an obvious choice for the vacant winger spot on the U.S. squad. Johnson mans the left side of midfield for a top team in the world's top league and possesses the athleticism, technique, passing skills, and smarts to be a true asset at the position. (He's also the No.1-ranked player in the ASN 100.)

Johnson also happens to be the Yanks' best option at left back, a position that has plagued the federation for years. Former U.S. boss and pathological roster tinkerer Jurgen Klinsmann couldn't decide where to play Johnson, moving the 29-year-old Munich native back and forth between the two spots so often that Johnson never really prospered in either role. To his credit, Arena met with Johnson in December and discussed the positional uncertainty: Johnson told his new coach that he doesn't care which position he plays for the U.S.—he just wants Arena to pick one and stick with it.

Fair enough. But I'm willing to bet that Arena plants Johnson on the back line and tries to find his other winger among the camp attendees.

Why? For starters, the American alternatives at left wing far outnumber the options at left back. DaMarcus Beasley is the leading left back candidate in camp, and he is an unaffiliated 34-year-old who has already retired from the U.S. national team once before. Atlanta United-bound Greg Garza and D.C. United's Taylor Kemp both play on the left side of defense, but neither has the requisite experience and it's hard to imagine starting either of them in a must-win Hexagonal game.

By establishing Johnson as his left fullback, Arena immediately solves one of his biggest problems and simultaneously sets up January camp as an audition for the Other Winger role. If the coach is smart—and he absolutely is—that's exactly what he'll do.

The Philadelphia Union midfielder has logged 2,065 minutes with the national team since 2014, many of those in an outside midfield capacity. Bedoya's statistical tally during this span: one goal and four assists.

Graham Zusi, another regular at the winger role for the U.S., registered two goals and three assists over 1,231 minutes during the same span. Zusi is now being asked to try out at fullback.

When Arena talks about improving the passing in the attacking third, it's entirely possible that he has Bedoya's recent performances in mind. Bedoya has plenty of grit and determination, and no one will question his work rate, but the former Nantes talisman doesn't always take advantage of his opportunities close to goal.

The 29-year-old will no doubt get a chance to show what he can do in January camp but his spot in the Starting XI is anything but secure.

Dempsey played out wide or underneath the strikers at both Fulham and Tottenham, performing brilliantly for the former and reasonably well for the latter. Arena has said that he considers Deuce an attacking midfielder more than an out-and-out striker, and if the 33-year-old were not battling an irregular heartbeat right now he would be the frontrunner to start in support of the forwards.

Should Dempsey recover in time to be considered for the March qualifiers, it's entirely possible that Arena would shift to a 4-1-4-1 and play Dempsey in a more central attacking midfield role. The most likely scenario, however, is that Dempsey is not quite ready to play in late March and either misses out on the Honduras and Panama matches altogether or makes the team as a late-game sub.

Here's hoping Dempsey returns to health, and to the U.S. fold, sooner rather than later.

To my eye, the 2016 Major League Soccer Rookie of the Year is better suited to play striker than wide midfielder, but Arena doesn't necessarily agree with my assessment.

Gyasi Zardes "has been a midfielder with the national team, and that is likely where he's going to be playing with us as well," Arena said via Facebook Live. "Gyasi's versatility makes him very valuable, and I think he's a lot like [Jordan] Morris in that regard that they can both play as strikers and outside midfield positions."

Because of this quote, and only because of this quote, Morris is officially in the mix for the fourth midfield slot on the national team. While the 22-year-old lacks a left foot, defends only as needed, and isn't exactly known for whipping in beautiful crosses from the flanks, he is fast, rugged, and very determined. He is also an underrated passer, which certainly helps his case for consideration on the wing.

I still feel Morris should be thought of as an Altidore replacement or as a guy who can come on in the 70th minute to provide a change of pace in the attack. Either way, it's hard to imagine a U.S. Hexagonal roster that does not include the former Stanford star.

See Arena's quote above. Also see Zardes' history in Los Angeles with Arena. But revisit some U.S. national team games and see how many times Zardes gave away possession. The Hawthorne, Calif., native has serious technical limitations, and repeated turnovers and wasted chances are not allowed when World Cup qualifiying is on the line.

Because he is big, because he is strong, because he is fast, because he plays several positions, and because he possesses an absolutely wonderful work ethic, the 25-year-old will be on Arena's radar from now until Russa 2018. But I don't see him as the solution to the U.S. national team's possession/passing issues in the attacking third.

How does Jermaine Jones fit into any midfield these days? A true box-to-box guy, Jones wanders all over the field, he's always looking to score goals, and he plays with an infectious, reckless abandon that can be an asset one minute and a liabilty the very next.

Klinsmann never seemed to worry about any of that, making sure that the 35-year-old got the starting nod whenever available for international duty. Jones and Michael Bradley couldn't figure out how to coexist on the same pitch, and Klinsmann wasn't much help in that regard.

Now that his most loyal advocate is no longer U.S. coach, Jones needs to focus his considerable energy on establishing a clear role in January camp. The Frankfurt native isn't a No. 10, and he's far too attack-minded to be trusted as a No. 6. The Jones-as-central-defender experiment is—thankfully—a fading memory, so....could Jones be a candidate for wide midfielder? Stranger things have happened.

Portland Timbers coach Caleb Porter has struggled to find the best spot for Nagbe. Klinsmann certainly couldn't figure it out, and then he and Nagbe had a falling out.

Next in line to solve Nagbe: Arena.

"I know Darlington from Major League Soccer and the many games he played against the Galaxy,” Arena said recently. “I think he’s a very talented player and he’s comfortable playing in a variety of positions. He can play as a No. 7, No. 11, a No. 10, and even a No. 8. We’re going to look at him in camp, as a starting point, probably out wide. But obviously be aware of the fact that he can play inside as well.”

Nagbe is the kind of player who could backup Kljestan at the hub of the wheel, fill in for Michael Bradley ahead of the back line, and be a difference-maker who delivers a killer pass in the final third. While Nagbe's versatility confounded the control-minded Klinsmann, it's easier to imagine the quietly confident Arena sorting through his various options, behaving in a decisive manner, and sticking to his guns.

Don't be the least bit surprised if Nagbe starts out wide against Honduras on the 24th.

If I ran things, however, 24-year-old Sebastian Lletget would be the guy lining up in the midfield alongside Bradley, Kljestan, and Pulisic when the U.S. faces Los Catratchos.

The San Francisco native and former West Ham academy player has everything the U.S. needs on the wing. He thrives in tight spaces, and CONCACAF qualifiers always feature close defending. Lletget plays hard on both sides of the ball—another requirement of World Cup qualification. He has great technical abilities and he is expert in making that killer pass, or getting on the end of somebody else's killer pass.

What's more, Lletget is always willing to try something audacious. He's afraid of nothing—in a very Clint Dempsey kind of way—and that sort of temperament tends to pay dividends as the competition becomes more intense.

Lletget has played numerous games alongside the likes of Robbie Keane, Landon Donovan, Gio dos Santos, Steven Gerrard, and Ashley Cole, and will not be intimidated by anything Honduras or Panama throw his way. He's the right man for the job, and with a strong showing in January in front of his former boss on the Galaxy, Lletget is perfectly positioned to make the most of this opportunity.

Do you agree with Godfrey? Who should slot in as the Other Winger on this team? Share your take in the Comments section below, and create your preferred Starting XI right here.