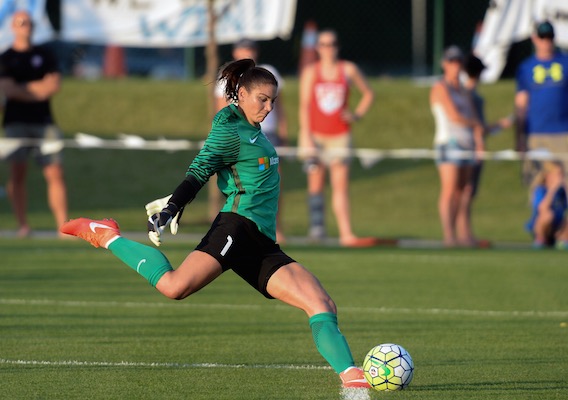 What is Hope Solo’s status in the NWSL? Hard to Say

U.S. Soccer suspended Hope Solo for six months and terminated her contract, which raises a series of questions about the goalkeeper's status with the National Women's Soccer League.
BY Steven Bank Posted
August 27, 2016
7:45 AM

HOPE SOLO'S six-month suspension from the U.S. women’s team and the termination of her contract has left a number of open questions. Plenty of commentators have examined the propriety of the suspension and the plausibility of the First Amendment defense raised by U.S. Women’s National Team Player’s Association representative Rich Nicholls.

As I’ve commented elsewhere, I don’t think she has much of a constitutional rights claim given the fact that U.S. Soccer would likely not be considered a state actor, although I do think a retaliation claim for her part in the filing of an Equal Employment Opportunity Commission (EEOC) complaint is more plausible if Solo can establish what courts have called a “convincing mosaic” of circumstantial evidence that the adverse job action was causally connected to the filing of the complaint. This may be difficult given the fact that other outspoken advocates for the EEOC complaint have not been treated in this manner and because of her history of transgressions, but Nicholls’ statement does appear to lay the groundwork for such a claim by asserting that a similarly situated male player would not be treated the same. Nevertheless, any such action beyond an internal appeal would likely burn her bridges completely toward a possible return to the national team and it’s not clear whether Solo is ready for that result.

Of more immediate interest is her status with the National Women’s Soccer League. As I wrote for American Soccer Now back in February, the contract national team players sign with U.S. Soccer creates a complicated relationship between the players and the NWSL. In lieu of providing a direct subsidy to the league, U.S. Soccer signs players in the national team player pool to a contract that pays them for both their national team duties and for playing with a NWSL team. So, when a player is terminated from the WNT, does that mean they are also terminated from their NWSL contract and have to negotiate a separate deal with the league (at a presumably lower rate)?

Even Solo’s coach with the Seattle Reign, Laura Harvey, seems to be uncertain on that point. According to a story in the Friday edition of the Seattle Times, Harvey admitted “I don’t know whether they’re going to keep paying her to play in the league or not. At this stage, I honestly don’t know how that’s going to work out.” As of Friday, Solo had not yet reported to the Reign to resume NWSL duties, leaving fans and her coach to wonder what is going on.

Although there is undoubtedly more going on beneath the surface than has been publicly revealed, this situation is fully covered under the Memorandum of Understanding the Players’ Association signed with U.S. Soccer in March of 2013. Under the MOU, a player agrees to a deal with U.S. that covers both their WNT duties and their NWSL duties. The salaries are broken down for each. In 2016, a Tier 1 national team player (which includes a player who was on the World Cup and Olympic squads, such as Solo) receives $72,000 for her national team duties and an additional $56,000 for her NWSL play.

Under the MOU, U.S. Soccer has the right to terminate a contracted player, subject to severance provisions that were not part of the original collective bargaining agreement, but were added when the MOU was negotiated. Most notably, it also provides for a short-term continuation of the NWSL agreement:

Term NWSL Contract Upon Release from WNT—if a WNT player is released from her WNT contract, she remains on her contract with the NWSL, for the remainder of the year

Therefore, barring any side agreement negotiated by the parties, Solo remains under contract with the NWSL through the end of Seattle’s season. Presumably, her formal pay would be the pro-rated amount of her $56,000 in pay designated to her NWSL duties, but because of the severance payments she would remain whole through the end of the season. Indeed, this appears to be what the term of the severance payments were designed to address. Under the deal, reclassifications occur as of July 1, which is presumably the WNT’s normal cycle in a non-World Cup or Olympics year. Since the NWSL season continues through September, it appears that the players’ negotiated for the three-month severance arrangement to cover just this sort of situation.

Will Hope Solo stay in NWSL? That’s a more complicated question. As her coach admitted, “I don’t know. This is life-changing for her. We’re all very mindful of that. We’re very conscious that we want to have conversations with her privately about what this means to her and what she’s thinking before we even think about what that might mean for us in the long term.”

Steven Bank is Paul Hastings Professor of Business Law, Lowell Milken Institute for Business Law and Policy, UCLA School of Law. He teaches courses in tax and business entity law, including a soccer law seminar entitled “Law, Lawyering, and the Beautiful Game." Follow him on Twitter.