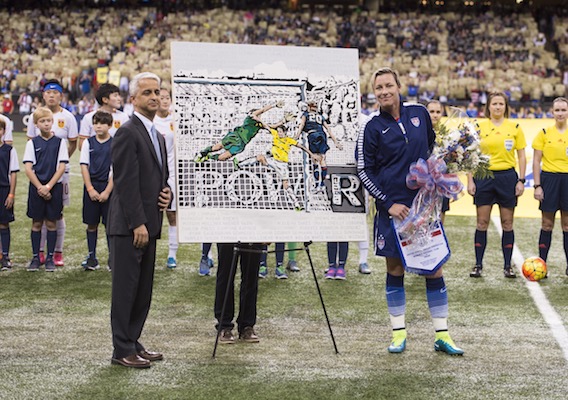 THE LAWSUIT FILED by the U.S. Soccer Federation against the U.S. Women’s National Team Players Association sent shockwaves through the soccer world. After all, the U.S. women’s national team are the golden children of U.S. Soccer right now, having just won the 2015 World Cup in Canada and gone through a prolonged victory lap of playing games around the country before record crowds.

Adding insult to injury, the lawsuit was filed on National Girls and Women in Sports Day, no less. Not surprisingly, the lawsuit, which was like a slap on the face when a pat on the back seemed more appropriate, has sparked national attention.

What few have mentioned, however, is that the party with the most to lose from this escalation of the labor conflict may not be U.S. Soccer or the U.S. Women’s National Team players. Instead, it may be the fledgling National Women’s Soccer League.

The dispute between U.S. Soccer and members of the U.S. women’s national team is deep-seated. Following close on the heels of the unsuccessful lawsuit U.S. women and their colleagues from around the globe filed last summer against FIFA and the Canadian Soccer Association to fight the use of artificial turf in the World Cup, national teamers walked off and refused to play a game at Aloha Stadium in Hawaii during their victory tour because of poor turf field conditions. Moreover, the women have complained about unequal treatment with the men not only on the field, but off it, noting that the men’s team gets more perks than they do—including more business class flights when they travel and more bonus money when they win.

The two parties have been negotiating for quite a while on a new collective bargaining agreement that would resolve these and other issues. The old CBA expired on December 31, 2012, but since negotiations extended beyond that point, the parties agreed to a Memorandum of Understanding (MOU) on March 19, 2013 that made changes to certain financial provisions and purported to extend the original CBA another four years.

So, why the lawsuit? The Players Association hired a new Executive Director, Richard Nichols, who has been more aggressive than the previous director, John Langel. In an e-mail to U.S. Soccer, Nichols claimed that "it is the position of the WNTPA that the CBA no longer exists, and further, that the MOU is terminable at will."  U.S. Soccer interpreted this to be a veiled threat that the players intended to go out on strike, potentially imperiling U.S. participation in the Olympics in Brazil. The qualifying tournament for the Olympics starts this week on February 10 and runs through February 21.

The question at issue is whether the terms of the old agreement are still in effect under the Memorandum of Understanding. If so, then the parties are subject to the standard “no strike/no lockout” clause and any disputes would have to go to arbitration. The problem is that the MOU did not specifically state an end date, even though it did suggest in less than clear language that it had a term of four years, and it did not contain language specifically carrying over all of the terms and conditions of the CBA not otherwise altered by the MOU.

According to the Players Association, this means that either the MOU has no end date, in which case it is terminable at will, or that it is a self-contained agreement that lacks the “no strike” clause from the expired CBA. The position appears aggressive in light of U.S. Soccer’s claims that the Players Association’s former executive director had testified in a deposition that a deal exists and extends through the end of 2016 and that there are e-mails from the Players Association’s attorneys indicating the intention was any items not specifically covered in the MOU would remain the same as they had under the CBA, but the Player’s Association disputes those claims.

U.S. Soccer has certainly taken the risk of strike seriously. Its lawsuit seeks a declaratory judgment establishing that the no strike clause remains in effect.

What does this have to do with the National Women’s Soccer League? The NWSL has a unique relationship with U.S. Soccer. Formed in the wake of the demise of the Women’s Professional Soccer League and the Women’s United Soccer Association before that, the NWSL was created with the explicit backing of U.S. Soccer. Not only does U.S. Soccer operate the league’s front office, but it pays the salaries of up to 24 U.S. national team players, amounting to an allocation of two-to-three players per team on each roster of between 18 and 20 players in the 10-team league.

In addition to the subsidy provided by U.S. Soccer, the Canadian Soccer Association and the Mexican Football Federation also pay the salaries of players from their national teams, although they are only committed to provide 16 and 12-16 players, respectively. The USWNT players, however, are both some of the best and the most marketable players in the league.

U.S. Soccer’s backing of the NWSL is crucial to its success, but it is also its Achilles heel. The lawsuit against the Players Association highlights this: If the members of the USWNT go on strike from the national team, they will also be going on strike against the NWSL given that U.S. Soccer, rather than the NWSL or its teams, is the employer of these players.

Going on strike is always fraught with difficulty for individual players. Not only do they forgo their salaries during the strike, but they risk damaging the league irreparably. In this case, however, not only would the USWNT players bear this latter risk that a prolonged work stoppage would threaten the viability of the NWSL, but so too would their club teammates. The difference is that these teammates would not themselves be able to share in any of the upside of a successful strike.

Just as the interests of the USWNT players and the rest of the players in the league are not aligned, U.S. Soccer does not have the same interest as the owners of NWSL. U.S. Soccer surely wants the league to survive given that it provides a place for almost all of its players to play, but its primary focus is appropriately on national team play. If, for instance, it could only settle a work stoppage by agreeing to reduce NWSL playing obligations, it would likely do so.

This illustrates the basic problem with the NWSL organizational structure. In the interest of securing financial viability, the league has sacrificed control. Effectively, this is a principal-agent problem. The league’s players are agents of different principals and therefore serve different masters. Some are loyal to their club teams and the NWSL, while others are loyal to their national teams. This might be the best the league can do in light of the financial difficulties professional women’s soccer leagues have faced in this country. Nevertheless, it could also be its undoing if the labor dispute between U.S. Soccer and the U.S. Women’s National Team Players Association is not resolved amicably.

In legal/business terms, the NWSL is currently a strategic alliance (where each party commits some of its employees to work on a project, but otherwise the parties remain separate and retain their distinct identities and interests) when it needs to become a true equity joint venture (where each party contributes resources to an entirely new entity in return for an interest in the venture’s profits). Under this equity joint venture model, instead of paying the salaries of the national team players that play on NWSL teams, the federations would each agree to contribute an equivalent amount to the league for a period of years. The league and/or teams would then pay the players and be their employers for the purpose of club play. That would leave the players aligned with their club teammates on league issues, while any labor dispute relating to national team duties and compensation would only affect players on the national team.

Why didn’t they do that when they formed the NWSL?

It may be a remnant of a period when there was no viable women’s league and the federations had to pay the players year-round to enable them to train. It also could be that the federations wanted to retain control over their players and the national team players were just as happy to bargain separately from the rest of the league on their combined club and national team wages. It certainly took the national team players “off-budget,” which avoided the excess spending that occurred under the soft cap in the failed women’s league that preceded the NWSL, but that could have been done through roster rules without keeping the national soccer federations as the players’ employers.

In any case, if the NWSL wants to take the next step in its development, it needs to move in this direction.