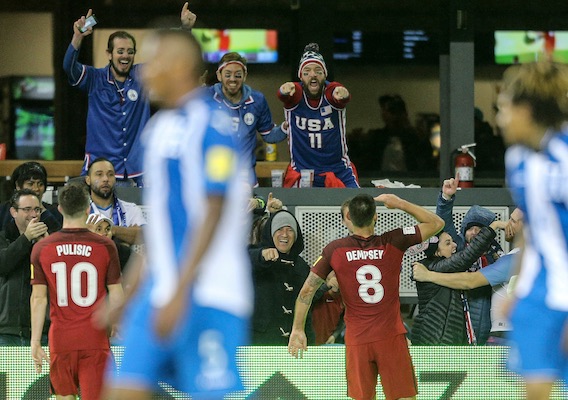 U.S. Victory Over Honduras Is Truly One for the Ages

The teenage playmaker, the veteran forward fighting a health issue, and the second-time coach who wants to book his third trip to the World Cup all came up big on Friday night at Avaya Stadium.
BY John Godfrey Posted
March 26, 2017
4:00 PM

SAN JOSE, Calif.—Eighteen, 34 and 65—those are the ages of the three most important participants in the United States national team’s 6-0 win over Honduras Friday night.

The teenager, of course, is Christian Pulisic, the Borussia Dortmund wunderkind who is arguably the best player on the squad. He started in the center of the midfield against Honduras—where he will likely play for the next decade or so—and displayed masterful vision and technique, scoring a goal and setting up three others.

The 34-year-old, Clint Dempsey, originally wasn’t going to be part of this team due to the irregular heartbeat that ended his 2016 season. Later, we learned, Dempsey would be included on the roster but wouldn’t start out of concern for his fitness. But when Bobby Wood suffered a back injury just prior to camp, Dempsey moved to the top of the depth chart, got the starting nod, and scored a hat trick in the biggest U.S. game since the 2014 World Cup.

The 65-year-old, Bruce Arena, is the mastermind who put all of the pieces together. He made the call to start Pulisic in the No. 10 role, despite fears that the youngster wasn’t quite ready for the responsibility in such an important game. Arena also named Dempsey to the Starting XI, although the self-deprecating coach isn’t taking a victory lap about that decision.

“We didn't have anyone else," Arena said in the post-game press conference Friday, drawing laughs. "It made it easy for me."

"It was impressive the way he kept improving,” Arena added, adopting a more serious tone. “Checking with his fitness coaches [in Seattle], we knew he could play. Then he plays late Sunday afternoon in Seattle, he comes in late Sunday night here, Monday he does a little bit of training, and he feels good. It was remarkable.

Dempsey shrugged off any sense of accomplishment associated with contributing 90 minutes: “You know me—I’m a fighter,” he said. “I looked the for the opportunity to get out there and show that I should be around still. It was great to play a part in the team getting three points.”

The duo had never appeared in the same Starting XI before Friday but you wouldn’t have guessed that based on their seemingly psychic interplay on the field.

"Clint's an easy guy to play with," Pulisic said. “It’s really fun to play in behind him and off of him.

"He's strong, he's technical, he makes good runs and he always gives good support. That's exactly what you need from a forward. And he’s clinical."

Dempsey had nothing but praise for his young teammate.

“He’s a great player,” Dempsey said “He can beat people one-on-one on the dribble and he creates mismatches because of that—someone else has to push to him. When you’re able to make good runs he’ll find you.

“It’s great to have players like that who can win those one-v-one battles and break things open,” Dempsey added. “He’s just getting better and better. The sky’s the limit for him.”

The 18-year-old and the 34-year-old were also in lockstep when discussing their 65-year-old coach.

“I owe a lot to Bruce,” Dempsey said. “He’s the one that first brought me in with the national team. He gave me the opportunity to play in World Cup qualifying games, play in the World Cup, get a goal in the World Cup. It’s great to come full circle.”

Pulisic’s assessment: “Bruce is a great guy. He really inspired us and motivated us to go out today and have a great performance. The game plan was really good and the team showed really strong.”

It wasn’t just a two-man show, certainly. Sebastian Lletget got things rolling with an early goal and looked extremely dangerous before coming off with a foot injury. Jozy Altidore combined well with his fellow attackers. Darlington Nagbe put on a subtle, effective display on the left wing.

But this night belonged to Dempsey, who now has 55 career goals for the national team, and Pulisic, who looked extraordinarily comfortable driving the offense.

“Christian is just a natural,” Arena said. “The game is easy for him. He's got exceptional skill, vision—he's pretty smooth.”

A week ago, World Cup qualification seemed like a bit of long shot. But after Friday’s game, the mood and the momentum of the U.S. national team have changed perceptibly. As the coach and players prepared to leave for Panama, you could feel a surge of confidence.

“I have nothing but praise for my team,” Arena said with a smile.