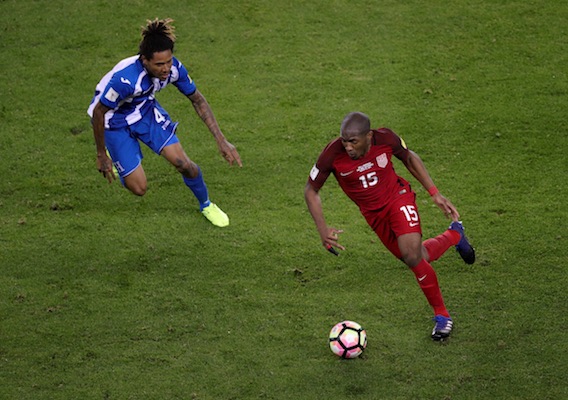 The 26-year-old midfielder is anything but flashy, both on the field and off, but his skill on the ball and sense of positioning make him one of the most intriguing players in the U.S. national team player pool.
BY Noah Davis Posted
March 26, 2017
8:00 AM

SAN JOSE, Calif.—On a night when the Untied States men's national team scored six goals, when Clint Dempsey posted a hat trick and Christian Pulisic registered a goal and two assists, Darlington Nagbe did not earn any points. He didn't even take a shot. His only contribution to the basic box score was a single foul suffered.

Despite the lack of stats, Friday night's 6-0 pasting of Honduras was his best game in an American uniform, and his most important.

Ever since the Portland Timbers midfielder appeared on the national team stage in late 2015, his teammates have praised his ability to be a difference-maker.

"I hate to overhype him but I just think that America doesn't produce a lot of those really shifty players who can get their foot on the ball and make people miss," Tim Howard said at the time. "It's not always spectacular. It's just a little shift here there to unbalance the defense. I like him. I like him a lot."

Alejandro Bedoya saw it, too. "When he gets the ball on his feet, he's a great player," he said after the victory. "He turns well. And he's deceptively fast."

That skill, however, hasn't always translated to game situations.

Against the Catrachos, there were flashes of what he can do and what's to come. The best moment came in the third minute, when Nagbe got the ball, exploded by a couple defenders, and released a pass. While nothing came of the moment, the confident burst of pace and creativity put the Honduras backline on its heels. That couple of seconds served notice, a flash that unbalanced the defense. All week Bruce Arena preached an attacking mindset to his charges. Nagbe's dribble helped turn those words into practice. Two minutes later, Sebastian Lletget scored the opening goal.

Following that moment, Nagbe—partnering with Jorge Villafana to defend the left side—receded. It was his only successful dribble of the night, paired with three unsuccessful ones. (For the record, wonderteen Pulisic posted three successful and six unsuccessful dribbles.) He wasn't spectacular, but on a night when the attack came on counters and went up the right side, he didn't need to be. He missed just two passes all night and was one touch away from breaking a few dramatic plays on those unsuccessful dribbles.

He spaced the field well, drifting into the middle to provide a switching option when the ball was on the right side and staying wide when needed. Nagbe's movement was the reason Michael Bradley found time and space on his goal:

#FlashbackFriday to this Michael Bradley goal from long distance!

If Nagbe isn't there to drift wide, the defense collapses on the American captain. Instead, he is, it doesn't, and the U.S. is up 2-0.

Defensively, the slight 26-year-old midfielder held his own with six tackles, five recoveries, and a clearance. He went in hard, went in smart, and usually won the ball.

Nagbe wasn't the best player on the field Friday night but he did show that he belongs. On the ball, he's the most exciting American player, non-Pulisic division. They both explode in the same way, the potential for greatness a split-second away. When the level of competition improves or Arena opts to play a more conservative lineup, the midfielder might lose his place as a starter.

Or maybe not. Nagbe, soft-spoken and reserved off the field, isn't going quietly into the night.