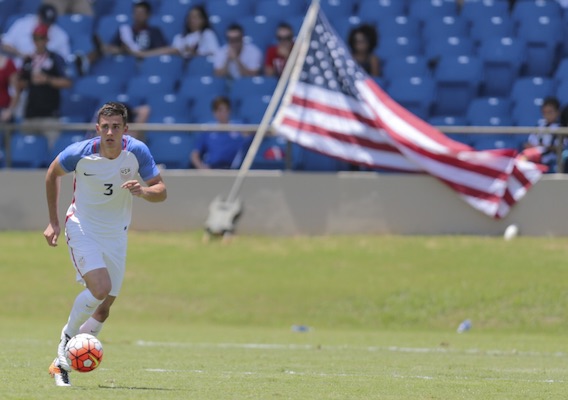 5 Thoughts on the United States' Defeat of Puerto Rico

Bobby Wood, DeAndre Yedlin, and Paul Arriola shined for the U.S. in Sunday's 3-1 victory over Puerto Rico. But a handful of Yanks seemed overly passive in the match—not a good sign for Jurgen Klinsmann.
BY Brian Sciaretta Posted
May 22, 2016
6:15 PM

THE U.S. MEN'S NATIONAL TEAM defeated Puerto Rico 3-1 in Bayamón in the first of three friendlies this week as it prepares for the Copa America Centenario. Overall, the Americans dominated possession and a few players stood out.

With many players still with their clubs, this game featured a mix of talent that will be on the Copa America team alongside players who are on the fringes of the team or part of the future. Given the nature of this makeshift team, it was a worthwhile exercise and an important learning tool. Here are five thoughts on the match.

Paul Arriola had a dream debut—registering a goal and an assist in a man of the match performance. In his youth career, Arriola has always thrived on the international stage, where he has seemed to raise his game. At the U-20 World Cup, Arriola was a scrappy difference maker and that effort helped turn around his once-flagging club career.

Now he’s playing more consistently at Tijuana and he did well enough with the Liga MX side to earn a U.S. call-up. It would not be surprising to see Arriola back with the U.S. soon after Copa America. If he continues to play well, he has the sort of skillset that can help the U.S.: speed, passing, and the willingness to try things.

2. Yedlin has raised his game

Following a successful loan to Sunderland, pundits wondered if DeAndre Yedlin's role on the national team would change. Would he stay on the wing or could he claim the right back position on an ongoing basis? Yedlin was energetic and active against Puerto Rico but also was in good position defensively.

Yedlin established himself in the English Premier League this year but the Copa America Centenario could help him elevate his game even further. Puerto Rico was a weak opponent and it's dangerous to draw any firm conclusions based on one friendly, but if Yedlin keeps playing confident soccer he could lock down a position that has been difficult to fill since Steve Cherundolo retired.

Bobby Wood’s 34th-minute strike gave the U.S. a 2-0 lead and it was a very well taken goal that had a high degree of difficulty. He made a smart diagonal run to the outside to receive a quality pass from Arriola. His first touch was smooth and it played him into the box. Wood was then able to use his speed to cut around the defender and move in on goal. He did not have a big window to shoot but placed the ball well over the charging goalkeeper.

Wood is going to be crucial to the success of the U.S. this summer. Without Jozy Altidore, the Yanks will not have as much strength in the box. Scoting goals will require skillful plays similar to what Wood showed on Sunday.

4. Some players were too passive

While a few of the younger players brought energy from the opening minutes, several veterans did not have strong performances and allowed Puerto Rico keep the game close. John Brooks, Danny Williams, and Tim Ream failed to play up to their standards. Ream, in his defense, is not a natural left back and sometimes struggles with his pace at that position.

Williams was particularly disappointing because the U.S. needs depth at his position, the No. 6 role. He lost out on a Copa America spot as Klinsmann elected to go with Perry Kitchen instead but Williams has the talent to be part of the team’s future. His most recent U.S. appearance came in a friendly loss to Costa Rica last October and Williams was very bad in that contest as well. Williams needs to take advantage of every chance he gets or else he will fade from the picture quickly.

Brooks, for his part, looked tired against Puerto Rico. Matt Miazga replaced him at the half and was an improvement, providing quality passing out of the back. Brooks had a great season with Hertha and should be one of the best players on the U.S., but he did not bring his A game to Puerto Rico. The fact that he has had many subpar outings defensively with the U.S should be a concern for Klinsmann, who needs a player like Brooks to translate his club success to the international arena.

5. Stefanowski Had His Team Prepared

Puerto Rico head coach Jack Stefenowski deserves credit for developing a smart game plan and keeping the game close. The New York City native kept his defense compact up the middle and really limited the American attack. The more talented Americans were always going to have the lion’s share of possession but Puerto Rico stayed within striking distance for most of the afternoon.

Early in the second half Emanuel Sánchez missed a golden chance to equalize after receiving a great cross in the box. The score should have been 2-2 at that point and the game would have taken on a completely different feel. When an overmatched team performs beyond expectations, the coach deserves a tip of the cap.