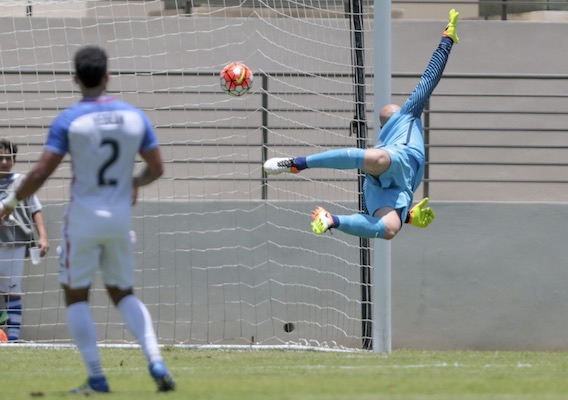 Tim Ream, Bobby Wood, and Paul Arriola all scored as the U.S. men's national team defeated Puerto Rico in Bayamon. It was an odd match that felt more like a scrimmage than an international friendly.
BY John Godfrey Posted
May 22, 2016
2:00 PM

DON'T READ TOO MUCH into the United States men's national team's 3-1 victory over Puerto Rico, the 152nd-ranked team in the world.

It was a low-intensity match on a very hot day that felt more like an intrasquad scrimmage than an international friendly. The pitch did not help matters, as players on both teams were slipping and sliding all over the place. Also strange: Puerto Rico didn't bother to mark DeAndre Yedlin on the right flank, allowing the Sunderland fullback abundant space to deliver crosses without a care in the world.

The match was a consolation prize of sorts for Tim Ream, Danny Williams, and Alfredo Morales — all players who earned starts but were left off the Copa America Centenario roster.

For John Brooks and Michael Orozco, the game was a good opportunity to see some game action after long stretches of inactivity.

Nothing much happened until the 20-minute mark, when Morales took a shot from outside the 18-yard box. Puerto Rico goalkeeper Matthew Sanchez could have caught the ball—it was hit straight at him—but instead he punched it out and then sprawled to the turf. The rebound fell to Ream, who delivered a left-footed blast into the far corner as Sanchez scrambled to get to his feet.

It was Ream's first goal for the United States in 21 international appearances.

The Americans scored again 14 minutes later. With two Puerto Rican players writhing on the ground thanks to a pair of rugged Alfredo Morales challenges, Paul Arriola found Bobby Wood 35 yards out and the newly minted Hamburg striker blew past two defenders, closed in on goal, and lifted a shot over Sanchez and into the back of the net.

Wood's muted goal celebration seemed to suggest that it was all too easy, and it looked like the Americans were likely to run up the score.

And then Puerto Rico pulled one back.

At the 42nd-minute mark Luis Betancur found a gap between Orozco and Brooks, and delivered a left-footed shot from 20 yards out that flew past Brad Guzan and into the back of the net.

The home team celebrated like it had just won the World Cup. The Americans looked embarrassed—and rightly so.

The first half ended with the Yanks up by a goal but Puerto Rico came out of the break with confidence and ambition. Three minutes after the restart Puerto Rico's Alexis Rivera floated a cross to a wide-open Manolo Sanchez who volleyed a left-footed strike from 10 yards out that flew just wide of the upright. After the play, U.S. defenders looked at one another as if to say, "What's going on here?"

Nobody seemed to know. Perhaps some of it could be chalked up to the three halftime substitutes who had just come on—Tim Howard, Emerson Hyndman, and Matt Miazga—but really, the U.S. defending was ridiculously bad at times. Colombia, Costa Rica, and Paraguay will be far less forgiving during the Copa America group stage.

To be fair, Puerto Rico's defending was also atrocious, evidenced by Paul Arriola's oh-so-easy 56th-minute goal. On the play Alejandro Bedoya pushed down the right flank, looked up to find two targets alone in front of net—Wood and Arriola—and apparently decided to provide the debutant with his first international goal. Arriola tapped the ball home easily and the Yanks went ahead 3-1.

At the 60-minute mark Klinsmann brought on two more subs who were left off the Copa America Centenario roster, Eric Lichaj and Julian Green. A few minutes later Fafa Picault came on and made his U.S. senior team debut.

Wood and Yedlin stood out for the Yanks, and both appear to be in great form ahead of this summer's big tournament. Green was very active during his half-hour on the pitch, but his crosses and shots left much to be desired. Lichaj made a very impressive push forward around the 80-minute mark, but Sanchez's sliding save prevented the Nottingham Forest fullback from notching his first-ever international goal.

What did you think of the match? Share your take in the Comments section below.