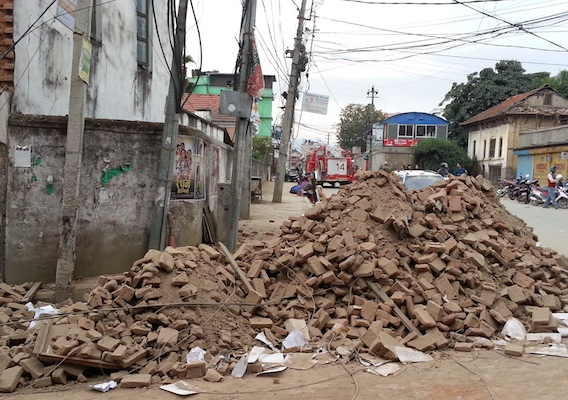 Jack Stefanowski, a New York native and the head coach of the Nepal national soccer team, spoke to ASN about the terrifying earthquake that shook Kathmandu and what people can do to help out.
BY Brian Sciaretta Posted
April 27, 2015
2:50 PM

SATURDAY WAS JUST ANOTHER DAY in Kathmandu for Nepal national team head coach Jack Stefanowski, a New York native, as he planned to scout some of his players in the local domestic league as part of preparations for this summer's South Asia Football Federation Cup.

And then the earth shook.

Around noon he was with his wife, Christel, and four-year-old daughter, Lila, at their apartment on the outskirts of Kathmandu when the ground began to shake violently. After a few moments of confusion, Stefanowski had his wife and daughter stand underneath a sturdy door frame as the walls of the apartment building began to wobble.

After about a minute the violent shaking, which opened up cracks in the Nepalese earth, stopped—but not before destroying large portions of Kathmandu. The Stefanowski family survived but many did not.

Current reports list the death toll from the Earthquake at 4,000 in what has become a global tragedy. The earthquake itself was an incredible 7.8-magnitude on the Richter Scale, one of the highest ever, and it led to deadly avalanches during Mount Everest's highly trafficked climbing season.

“We’ve been lucky,” Stefanowski told American Soccer Now from Nepal. “The aftershocks have started to subside but for two days it was frightening. I was at my apartment when it came. I had my family gather underneath a door frame. The building swayed back and forth. The longer it happened, the more scared you got. The aftershocks have been terrible since you don’t know when it all is going to end or when the next one will come.”

“It’s the second ones that really create the terror.”

Stefanowski, 40, doesn’t know the status of his apartment building but said it wasn't hit as hard as other buildings in his area and was still standing. He is planning to return home on Tuesday to inspect it and see if there is heat and running water.

The toll the temblor has taken on his family has been significant. Lila was surprised with the first earthquake and didn’t fully understand it. The extraordinarily powerful aftershocks, however, have hit the hardest.

“She handled the first one OK,” Stefanowski said with a pause. “When the second one hit, the 6.7 aftershock, she became more frightened. She was scared when that one came."

Following the earthquake, Stefanowski briefly surveyed the damage near his building and took pictures. Instead of heading into the middle of the city, he took his family outside the city to a friend’s house which was built to better withstand earthquakes.

As he began to hear about the extent of the damage, Stefanowski came to understand it will be a long, long time before Nepal and Kathmandu are the same.

There is a historical region of the city that Stefanowski likes to visit with his family where the local laws prevent new buildings and the existing design reflects traditional Nepalese culture. Stefanowski was there recently and had planned to visit again this week.

After the quake, however, Stefanowski could only say that he has heard the area “is finished.” According to the New York Times, four of the area’s seven Unesco World Heritage sites were severely damaged in the quake.

Many of those who have survived have no place to go and the government does not have the resources to help. Relief agencies are on their way but it will take time before they can mobilize and assist.

According to Stefanowski, there is a great deal of confusion about what to do and the conditions are poor throughout the Himalayan nation.

“At night it is cold, rainy, and wet,” Stefanowski explained. “You have people outside because they don’t have the shelter. They don’t trust that their building will hold up. They are staying outside and kind of camping out. The conditions are bad—especially last night when it was raining and cold. There were reports that another big quake was coming and that created more of a fear.

Stefanowski is currently in his second stint as head coach of Nepal’s national team. He was hired the first time in January of 2013 with a one-year contract and was not offered a new deal when it expired as Nepal’s football federation elected to go with a local coach. However, after a string of poor results, Stefanowski was brought back midway through 2014.

Before coaching in Nepal, he had head coaching jobs with Puerto Rican clubs Bayamon FC and Sevilla FC.

In 2010 he was even the interim head coach of the Puerto Rican national team. His longest tenured job was as an assistant coach with the second-division Puerto Rican Islanders and he was on the staff in 2010 when the Islanders pulled off a stunning upset to eliminate the Los Angeles Galaxy in the CONCACAF Champions League.

Two years later he learned about the opening for the Nepalese national team and was hired after impressing during interviews. Since that time, he has developed a tight bond with his players. One of the most difficult aspects since the earthquake has been contacting his players to see if they were safe.

Some of his players have not been accounted for and Stefanowski is worried.

Nepal’s domestic league is suspended for the foreseeable future and the city's most used soccer stadium, Dasarath Rangasala Stadium, suffered significant damage. Soccer, as you might expect, is the furthest thing from anyone’s mind.

One thing the New York University graduate hopes to do is help with the country’s recovery effort as soon as possible.

“Now I plan on getting back to the city and helping out with the recovery effort," Stefanowski said. "Absolutely.”

The American soccer community is known for its generosity for those in need, especially when it comes to rallying around one of their own. For a list of some agencies providing disaster relief in Nepal, please click here.