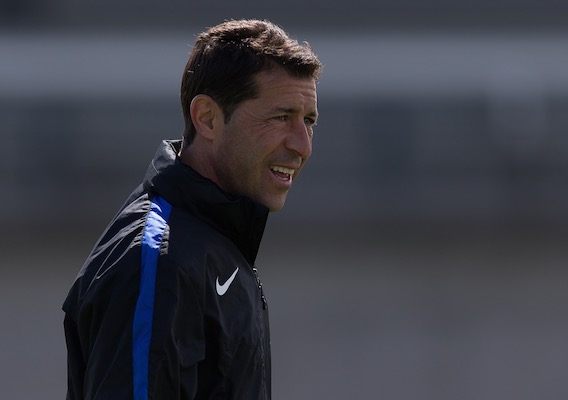 Jeremy Ebobisse and Sebastian Saucedo scored for Tab Ramos' team to help the U.S. U-20s to a win in the NTC Invitational tournament. Brian Sciaretta has a match report and analysis for you.
BY Brian Sciaretta Posted
June 30, 2016
10:00 PM

LED BY Jeremy Ebobisse and Sebastian Saucedo, United States U-20 team showed well in its first game at the NTC Invitational with a 2-0 win over Costa Rica. From the opening whistle, the Americans dominated play to overwhelm the visitors and cruise to three points in Carson, Calif.

Even with group stage games taking place every other day, thereby demanding heavy player turnover, U.S. U-20 head coach Tab Ramos elected to start many top players that are strong favorites to be part of the World Cup team eyeing next year's tournament in South Korea.

The backline featured Aaron Herrera on the right and Marcello Borges on the left, with Miles Robinson and Auston Trusty in the middle. Jonathan Klinsmann started in goal.

University of Maryland central midfielder Eryk Williamson wore the armband and played alongside Real Salt Lake’s Danny Acosta. In the midfield, top Villarreal prospect Mukwelle Akale played on the right with Sebastian Saucedo on the left. Fulham’s Luca de la Torre started in the middle and Duke forward Jeremy Ebobisse was at the tip of the spear.

The Costa Rica team consisted of many of the players coming from its 2015 U-17 team which advanced to the quarterfinal of the U-17 World Cup with wins over France, South Africa, and North Korea.

The United States struck midway in the first half on a very nice sequence when Sacudeo took a pass in the midfield and moved toward the box. He fed Borges on an overlapping run and the University of Michigan left back sent a low cross to Ebobisse for a tap in and a 1-0 lead.

In the 52nd minute, Ebobisse helped create a second U.S. goal when he took a pass near the edge of the box and used his body to shield off Costa Rican defenders. He spotted Saucedo making a run and sent a left-footed passes to the midfielder. Saucedo controlled the pass with his first touch and sent a perfect low shot past the keeper with his second touch for a 2-0 lead.

The U.S. put on a very nice showing overall. Its backline was rarely tested and the standout performance came from the attacking four players of Akale, de la Torre, Saucedo, and Ebobisse. Those players were simply too much for Costa Rica to handle.

The Yanks could have added more goals. Saucedo rattled the crossbar with a hard shot in the game’s final minutes and came close again second later. Deep in stoppage time, Akale appeared to have been taken down in the box for a penalty but it was denied by the officials.

Next ups for the U.S. will be a game against Panama on Friday at 9pm ET.

While the last cycle of U.S. U-20 players turned over top defensive players, this team features abundant attacking talent. The wingers and offensive midfielders are well-established but entering this tournament there were questions about the center forward role.

Ebobisse make a strong statement, showcasing a combination of physical strength and technical ability. If he is surrounded by players like Akale, Saucedo, and de la Torre—as well as Brooks Lennon, Josh Perez, Gedion Zelalem, and maybe Christian Pulisic waiting to join the team later in the cycle, Ebobisse will get a lot of chances.

His goal against Costa Rica was his third in six games for the U.S. U-20 team.

Ebobisse is still technically at Duke University, where he registered seven goals and four assists in 19 games for the Blue Devils in 2015. He took the spring semester off to trial with clubs domestically and abroad but as of this moment, his future is unsettled. He should have options and one might be to return to Duke and potentially showcase himself at the U-20 World Cup.

Right now, it is looking like getting Saucedo back into the U.S. set-up is going to be important for the U-20 team. Last November, Saucedo played for Mexico’s U-20 team in a camp but returned to the United States this year for the Dallas Cup.

Saucedo was the best player on the field in the game after being involved in several scoring opportunities. His goal was well taken and his run created the opening goal.

On the right side, Akale sparked a good deal of interest and it was easy to see why there is hype. He is a top youth player at Villarreal and while he was not part of either of the goals against Costa Rica, he drew many fouls as defenders struggled to contain him.

Backline was a mixed bag

One area of concern for the U.S. is that the distribution out of the backline was lacking on a night when the Yanks were sharp overall. Central defense is expected to be very competitive this cycle with Erik Palmer-Brown, Tommy Redding, and Cameron Carter-Vickers not involved in this game but all potentially top tier candidates for Ramos.

Among the starters, one notable exception on the night was Borges who looked very good at left back. His assist was just one of many impressive moments. In particular, his chemistry in the midfield with Saucedo was noteworthy, and with the left back position wide open for this U.S. U-20 team, Borges made a strong statement.