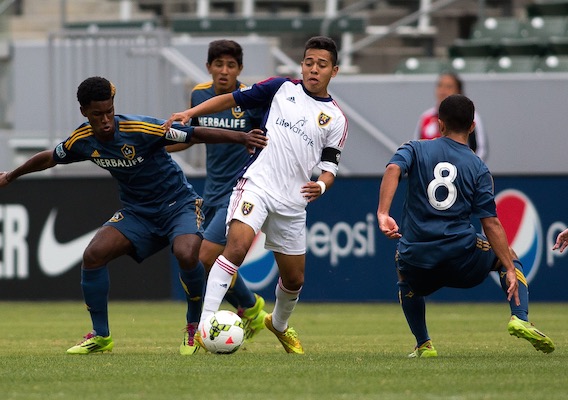 Though Tempted by Mexico, a Talented Yank Returns

SEBASTIAN SAUCEDO was born in Los Angeles and raised in Utah, but when the Mexican soccer federation invited the dual-national to represent El Tri's U-20 team in two November friendlies, he accepted the offer.

At the time it seemed like a significant loss to the United States Soccer Federation and its U-20 coach, Tab Ramos. The 19-year-old Saucedo is signed with Real Salt Lake but is currently on a loan deal with Liga MX side Veracruz. So far in 2016 he has featured in two Liga MX games and has been a regular in the Copa MX, where he scored his first professional goal in a 1-0 winner over Jaguares.

After taking time to rethink his allegiance, Saucedo opted to return to the United States despite ongoing interest from Mexico. "Bofo," as he is known, said his decision to return to the Stars and Stripes was based feelings of loyalty.

“It was a tough decision,” Saucedo told American Soccer Now from Mexico. “I had both options—either staying with Mexico and I didn't know if I was going to come back to the U.S. or not. But it was something I couldn't do to the U.S. after what they've done for me for such a long time.

"I've been with them since the U-15s. They were there for me since the beginning. I just can't turn my back on them.

“I didn't know if they were going to close the doors on me—and it would have been understandable if they did close the doors. But I made the decision then talked to Tab. I told him this is how I feel and I wanted to go back to the team where I felt at home. He didn't say anything and I felt like he wasn't going to call me back. But he didn't close the door and I appreciate Tab letting me back in to rejoin the group because it's easy to say no. But it was great for him to do it and U.S. Soccer to open the door once again.”

The U.S. U-20 team is shaping up to be very talented squad. In addition to Saucedo, who plays either as a forward or as a right midfielder for Veracruz, American players of this age group have been making impressive strides of late.

A quick look at the current player pool:Christian Pulisic has earned first-team minutes at Borussia Dortmund; Mukwelle Akale is a top prospect at Villarreal; Cameron Carter-Vickers has been on the verge of the first team at Tottenham; Gedion Zelalem is progressing at Rangers (on loan from Arsenal); Erik Palmer-Brown is starting for Porto B; Matthew Olosunde recently signed for Manchester United; Joshua Perez has done well for Fiorentina’s youth teams since inking a four-year deal in February; and Brooks Lennon is earning minutes with Liverpool’s U-21 team.

Saucedo has played with many of these players and is confident in the group's talent.

"We have a bunch of quality players in Europe and combining them with the players here in Mexico and the U.S., it's going to be amazing.”

While the U.S. U-20s look to be part of his future, his club situation is a bit more unsettled. Should he continue to impress on loan at Veracruz, there is the possibility Veracruz or possibly another Mexican team could arrange a sale. Otherwise he could return to Real Salt Lake [where he signed in 2014 as a homegrown player] and build on his 2015 season where he made nine appearances.

Despite living in Mexico, Saucedo is keeping tabs on Salt Lake and following the team’s progress. His priority, however, is with Veracruz, where he appreciates the rigorous soccer culture and embraces the fact that players have little time away from the team.

“These guys spend more time in hotel rooms than with their family," he said.

As for the quality difference between Liga MX and Major League Soccer, Saucedo believes "the gap is closing. MLS is improving and I believe it will get there sometime. But I think the difference is that in Mexico there is a better understanding of the game of soccer—how it's played. It's a lot more tactical. The mental part overcomes the physical part. You don't have to be too fast to do things. You can be smart and make smart decisions. You can be the fastest player but if you're not smart, you're not going to [do] anything.”

The Dallas Cup has been an important tournament for the U.S. U-20 team in recent years and in 2014 the Yanks advanced to the final before falling to River Plate. That year players including Palmer-Brown, Matt Miazga, Zach Steffen, and Rubio Rubin emerged as key contributors for Ramos.

This year, the United States will open its Dallas Cup campaign on Sunday, March 20 against Monterrey before facing Fulham the next day. It will then round out group play against Hoffenheim on March 23.