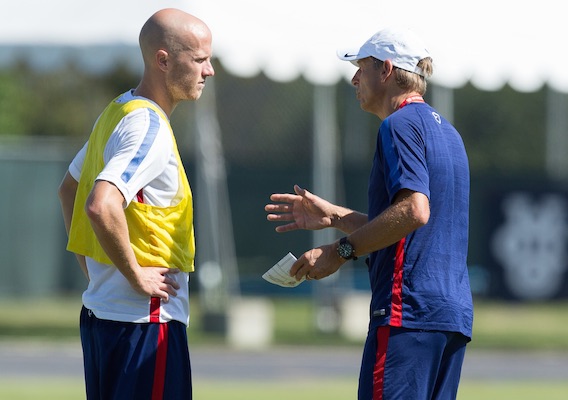 U.S. Soccer's Cupboard Is Bare and Its Future Is Bleak

ASN Contributing Editor Brian Sciaretta always tries to find a positive spin when U.S. Soccer teams struggle, but after the two losses yesterday he has nothing to offer U.S. fans looking for a bit of comfort.
BY Brian Sciaretta Posted
October 11, 2015
8:40 PM

LAST NIGHT a well-known sports radio host and U.S. Soccer fan sent me a message asking why he shouldn’t be on a ledge right now. Lacking a witty response, I tried to think of a thoughtful response that reflected my usual optimistic and hopeful nature. That didn’t come either.

“I’ve got nothing,” I eventually responded, honestly.

That pretty much sums how I feel about Jurgen Klinsmann’s program after what was darkest day of American Soccer that I can recall. Normally, win or lose, I typically write up my match thoughts on games focusing on lessons learned and where the team goes from there.

Saturday was different, a devastating blow to Klinsmann and U.S. Soccer as its two oft-stated goals for both 2015 and this World Cup cycle both came woefully short. Writing up a simple analysis of the game focuses on the small picture, but the problems are serious and reflective of something bigger.

Yesterday afternoon the United States U-23 team was outplayed, outhustled, and outcoached by Honduras, 2-0, with an automatic Olympic berth on the line. While the Americans were not officially eliminated from earning a spot in Rio, the odds are that it now will miss out on its second straight Olympics—a tournament that’s been extremely useful in sending players onto the full national team.

As the federation’s technical director, Klinsmann is ultimately in charge of overseeing the U-23s, even installing his top assistant, Andi Herzog, as the team’s manager.

Then the main event last night saw the U.S. senior side fall to Mexico, 3-2, in the CONCACAF Cup, which means that the United States will miss out on the 2017 Confederations Cup. Some have debated the value of the tournament, but for teams in second-tier regions like CONCACAF, it provides a rare and crucial chance to play in an official tournament against stronger opponents from across the globe

In a single day, then, U.S. Soccer missed out on the Confederations Cup and most likely the Olympics. The proposed one-off Copa America Centenario is likely a go despite all of the scandals it FIFA and CONCACAF, but even that remains somewhat questionable.

U.S. Soccer has endured dark days in the past. In 1998, after an embarrassing loss to Iran at the World Cup, the Yanks were shamed by a terrible showing on the world's biggest stage. After the 2006 World Cup, the U.S. national team program shut down for six months in an effort to land Klinsmann as coach—a terrible idea that looks even worse in light of the program's output in recent months.

Both times, the U.S. Soccer Federation bounced back. Bruce Arena quickly came in and restored order after 1998. In the following year, he took the team to the Confederations Cup and had it playing with a true chip on its shoulder. With wins over Saudi Arabia, New Zealand, and Germany, the team finished in third place. The Olympic team in 2000, meanwhile, advanced to the semifinals and produced talent like Landon Donovan and John O’Brien.

After the debacle in 2006, Bob Bradley came in with low expectations after the failed Klinsmann hire but he promptly won the Gold Cup to qualify for the Confederations Cup—where he would take his team past No. 1-ranked Spain and into the finals. Bradley also led the team to a Hexagonal victory and helped the United States win its World Cup group in 2010—a federation first.

After last night, it’s tough to see the light at the end of the U.S. Soccer tunnel. The real problem wasn’t simply yesterday’s pair of devastating losses; it’s that they were entirely predictable. Losses and upsets happen, but the truth is that the style of U.S. teams right now can be described as tentative, reactionary, and lacking vision.

When Klinsmann was hired, many hoped that the U.S. would take the next step in its growth, with the endgame being a solid national team program not just by regional standards but on a global scale. Instead, more than four years after his hire, the U.S. team hasn’t just regressed globally—it has regressed in CONCACAF too.

How else do you explain two straight U-23 teams (most likely) failing to reach the Olympics? Or the fact that the full national team finished fourth at the Gold Cup without facing Mexico and being outshot in the tournament 70-46 by Honduras, Haiti, and the two games against Panama?

At the 2014 World Cup, the U.S. did advance out of the “group of death,” but aside from a 20- to 30-minute stretch against Portugal, the team was on its heels for all four of its games. It took set-piece goals (like Brooks’s corner-kick header) and moments of individual brilliance (like Jermaine Jones’ long-distance thunderbolt ) to advance. As a team, the Americans were thoroughly outclassed.

Klinsmann said his first World Cup cycle would lay the foundation for the program and that the second would provide the pay-off.

What is that vision? Where is the progress? What has he done in 2015 that suggest a better future?

When the Yanks defeated Ghana at the World Cup, the team scored in the first and last minutes of the game to secure the win. The 90 minutes in between saw the United States bunkering and chasing the ball against a proactive opponent that dominated possession and created most of the chances.

It’s important to bring up because against Mexico, Klinsmann started nine out of the 10 field players he started against Ghana. (If not for an illness to Alejandro Bedoya, it probably would have been 10 of 10.) The team was old, too: Six of the starting 11 were over 30, and another three will be by the 2018 World Cup.

So instead of trying to build off the 2014 World Cup, Klinsmann elected to deploy his old guard, and to the surprise of nobody, the same shortcomings of the same team were exposed. Despite the close score, Mexico outplayed the Americans badly. It took set pieces and chances against the run of play, as always, for the U.S. team to generate any kind of attack.

After last night, then, there are a few in the media calling for Klinsmann to be fired—although everyone knows that is not going to happen. Landon Donovan was right this week when he demanded Klinsmann be held accountable should the U.S. lose.

Sadly, therein lies the real problem: For Klinsmann, it seems, there is no pressure, no accountability.

A hallmark not just of great soccer, but of any great organization in general, is accountable leadership with a clear and inspirational vision that people can buy into. Lack of accountability breads complacency; complacency leads to stagnation; and stagnation leads to mediocrity. Under Klinsmann, the U.S. has gone right through that chain.

Where is the leadership? Complaining that not enough players are in Europe isn’t a vision, nor is it leadership. The same can be said about bemoaning fitness levels of the team in the middle of the offseason. MLS is not on par with the top leagues in Europe but it is improving and it's something that all U.S. national team coaches have to work with—it can be done. Klinsmann has introduced just two new players into the regular fold this year—Gyasi Zardes and the questionable-at-best Ventura Alvarado.

Is that Klinsmann's vision for the future?

Want to know what bold leadership looks like? Just weeks before the 2002 World Cup, Bruce Arena lost his starting defensive midfielder, Chris Armas, to a torn ACL. His captain, Claudio Reyna, was also struggling with injuries and missed the opener against Portugal. Instead of playing people out of position or finding an aging option hoping to get by on his experience, Arena went with Pablo Mastroeni, who had received his American citizenship only a year earlier and who had never played outside of MLS.

That depleted U.S. team played inspired soccer, not reactive soccer, and Mastroeni shut down Luis Figo, the reigning FIFA World Player of the Year, in a stunning win. It still might be the greatest coaching move in the history of U.S. Soccer. Later that tournament, the U.S. defeated Mexico with a display of aggressive soccer and lost to Germany in the quarterfinals only after a hard-fought performance during which the U.S. actually took it to Germany for long stretches of play.

Positive results and performances could have ushered in some of the hope U.S. supporters felt back in 2002. Instead, it ushered in American soccer’s version of The Winter of Discontent. Most American fans have been left uninspired as no part of the program looks to be heading in the right direction. (In case you missed it, the U.S. U-20 team lost to Germany 8-1 this week and fell to France 6-1 last month.) My fear is that the program’s best days, at least for the foreseeable future, are behind it.

So now, after a full night’s sleep, if somebody else asked me to say something positive about U.S. Soccer and its future, my answer would remain the same.