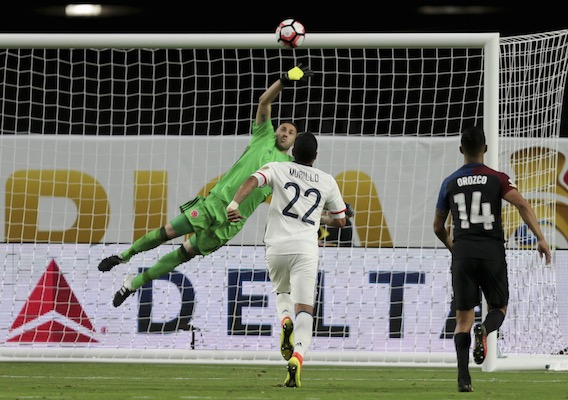 U.S. Loses to Colombia to Finish 4th in Copa America

Colombia proved once again that it's a bit better than the United States, defeating the Yanks 1-0 to finish third in Copa America Centenario. Carlos Bacca's 31st-minute strike was the difference.
BY John Godfrey Posted
June 25, 2016
10:00 PM

PRESENTED WITH AN IDEAL OPPORTUNITY to give Christian Pulisic and Darlington Nagbe starts against top competition in Saturday's third-place game against Colombia, Jurgen Klinsmann instead chose a very familiar lineup.

Eight of the 10 outfield players who started against Colombia in the Copa America Centenario opener on June 3 also got the nod in the rematch. The only two who missed out—Fabian Johnson and John Brooks—watched from the sidelines due to injuries.

As before, the North Americans played hard but came up short against the more technically adept South Americans. A Carlos Bacca goal in the 31st minute proved to be the difference in the contest, as Colombia finished third in Copa America Centenario, and the Yanks finished a respectable fourth.

Perhaps more importantly, the U.S. rebounded well from the humiliating 4-0 loss against Argentina in the tournament semfinals. Klinsmann and his men can now look back on the tournament and see more positives than negatives.

The Americans nearly opened the scoring in the 16th minute on a beautiful sequence that featured clever touches, slashing runs, and an Alejandro Bedoya cross that found Clint Dempsey racing through the six-yard box. If not for Cristian Zapata's desperate sliding block, the U.S. would have jumped out to an early lead over the South Americans.

At the midway point of the first half, the U.S. was holding its own against Colombia, and in fact might have been the slightly better side. But poor decisions in the final third, as well as some poor touches, hurt the Americans.

Colombia, on the other hand, seemed to raise its game whenever it got close to Tim Howard's goal.

In the 31st minute, Juan Cuadrado hustled to retrieve a ball that was heading toward the touchline. He succeeded, and then passed to James Rodriguez just outside the penalty area. The Real Madrid star immediately turned nothing into something, floating a pass to a streaking Santiago Arias, who headed the ball past Howard and toward the far corner. Carlos Bacca and DeAndre Yedlin raced to get to the ball but Bacca got there first and slammed the ball into the back of the net to give Colombia a 1-0 lead.

The U.S. did not back down: In the 37th minute, Yedlin sent in a cross from the right flank that crossed up both teams—it may have been a mishit. The ball ricocheted around the box, from Jermaine Jones to Bobby Wood and then finally to Alejandro Bedoya. But none of the Yanks managed to pounce on the ball and claim glory.

Two minutes later, Gyasi Zardes and Clint Dempsey combined well in the center of the field, just outside the Colombian penalty area. Dempsey found Wood, who had a chance to unleash a shot on goal but he hesitated and Colombia eventually broke up the play.

Just before intermission Jones attempted a cross from close proximity on the left side of the box. Arias jumped up to head the ball away but got it wrong and the ball bounced tantalizingly toward the Colombia goal, eventually hitting the side netting as David Ospina scrambled helplessly.

The U.S., a good team, should have scored multiple times in the first but fell short. Colombia, a very good team, buried its one quality chance.

The same narrative continued after the break.

In the 51st minute a Colombian defender dumped Dempsey 28 yards out from goal and in the center of the pitch. Just as he did in a similar free kick attempt in the tournament opener, Dempsey shot around the wall and targeted the upper corner to Ospina's left. As before, Wood thought the ball was going in and raised his arms in celebration. And, as before, Ospina made a great sprawling save to keep the U.S. off the scoreboard.

With the U.S. pressing forward and Colombia eager to pounce on the counterattack, the game began to open up. Both teams, in fact, rattled the woodwork close to the one-hour mark.

Colombia's Cuardado took advantage of some lax defending from Michael Orozco and chipped a ball over Howard from the edge of the penalty area. The slow-moving shot caromed off the lower half of the crossbar and stayed out—a huge break for the Americans.

About a minute later, Wood wrestled past a defender inside the Colombian box and had a good look at Ospina's goal. He targeted the far corner but hit the upright as his exasperated teammates put their hands to their faces in disbelief.

Wood, who was excellent in hold up play throughout the match, had another chance five minutes later. Back in the Colombia box with the ball at his feet, the Hamburg striker could have sprung an unmarked Zardes on the left side of the box, but instead Wood tried to plow through his defender and was dispossessed. Dempsey had a half-chance after the play was broken up but his left-footed attempt went wide.

With 15 minutes left to go, Klinsmann made a change, subbing out Bedoya in favor of the more technical and offensive-minded Pulisic.

A few minutes after that, Bradley—who appeared to be struggling after a first-half tackle—came off in place of Nagbe.

The tension mounted in the final 10 minutes of the game, as the U.S. fought valiantly to equalize and send the game to penalty kicks while Colombia pounced on every counterattack opportunity and tried to put the game away.

In the 82nd minute, Pulisic made a brilliant sliding tackle in the Colombian half that created an outnumbered chance for the Yanks. But Yedlin held onto the ball too long and then misplaced his eventual cross, letting the visitors off the hook.

As the clock ticked toward the 90-minute mark, Colombian players engaged in some elaborate gamesmanship, feigning injury and wasting time as they tried to hold on to the lead. When they weren't writhing on the grass and clutching their legs, the visitors did an admirable job playing keep away.

Just after stoppage time the Americans made another good push forward and Zardes found himself with the ball 10 yards from the Colombian goal with numerous options to consider. The Los Angeles Galaxy attacker hesitated, however, and then made a late, clumsy cross that was easily stopped.

It would prove to be the Americans last opportunity on goal.

Both teams traded red cards in the waning moments of the match—Orozco lost his mind by slapping a Colombian player right in front of the referee—but the Colombians held on to defeat the U.S. for the second time in three weeks.

John Godfrey is the founder and editor in chief of American Soccer Now, and he would love to hear your thoughts on the match, and the tournament, in the Comments section below.