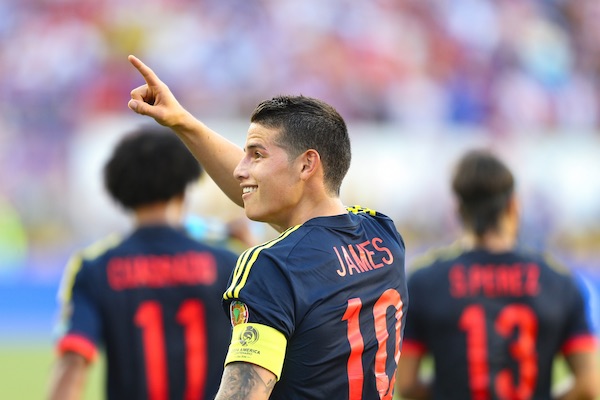 In front of a sellout crowd of 67,439 in Levi's Stadium, Colombia defeated the United States on first-half goals from Cristian Zapata and James Rodriquez to claim the first victory of Copa America Centenario.
BY John Godfrey Posted
June 03, 2016
11:40 PM

SANTA CLARA, Calif.—Jurgen Klinsmann's U.S. men's national team proved that it could win back-to-back friendlies against South American teams in the past week, but on Friday night the Americans showed that they weren't quite ready for a dynamic Colombian team in a full international contest.

The visitors scored two first-half goals and fought off a hard-working but tactically unimaginative U.S. side to win the Copa America Centenario opener, 2-0.

"We were absolutely OK with the team performance," Klinsmann said in the post-game press conference. "Obviously we got punished with two set pieces in the first half and then against a quality team it’s very difficult to get back into the game.

"The message overall is positive to the players even if they are obviously disappointed that we didn’t get any points. We had a totally even game here."

Klinsmann sent his men out in a 4-3-3 formation, with Michael Bradley positioned in the center of midfield and in front of the back four. Jermaine Jones and Alejandro Bedoya flanked the U.S. captain, and the front line featured Bobby Wood, Clint Dempsey, and Gyasi Zardes.

On paper, Colombia had the clear advantage: The South Americans are ranked third in the world, and at Thursday's press conference U.S. coach Jurgen Klinsmann listed Los Cafeteros as one of the favorites to win Copa America Centenario.

The two teams have played 17 times in all, with Colombia winning 10 and losing just three. In their last meeting, a 2014 friendly played at Craven Cottage in London, the Americans jumped out to an early lead but eventually fell 2-1. The U.S. last beat Colombia 12 years ago, a 3-0 win at Titan Stadium in Fullerton, Calif.

The game was chippy early, and it was the Americans doling out most of the punishment. Bacca, in particular, seemed to have a bullseye on his back, as U.S. defenders Geoff Cameron and John Brooks laid into the striker at every turn. Mexican referee Roberto Garcia swallowed his whistle in the early going, and both teams ramped up the rugged play.

While the United States was trying to set the tone with physicality, Colombia seemed more intent on scoring. And in the eighth minute, it did. After winning a corner kick, Colombia's Edwin Cordona delivered a dangerous ball into the center of the penalty area. Cristian Zapata broke free from his marker, Cameron, and sent a low screamer past Guzan to give the visitors an early lead. The sizeable contingent of yellow-clad Colombia fans—they seemed to outnumber U.S. fans—erupted in cheers.

Both teams demonstrated the ability to possess the ball through the midfield, string together a dozen or more passes, and gradually push into the opponents' third of the field. When the U.S. closed in on David Ospina's goal, however, it ran out of ideas and eventually turned the ball over.

Dempsey drew a series of fouls a few yards outside the Colombian penalty area but none of the ensuing free kicks came close. The Yanks' best chance of the half also came from Dempsey, as he combined nicely with Gyasi Zardes and blasted a left-footed shot from 25 yards out that flew just wide of the upright. The Americans finished the first half without a single shot on goal.

Colombia, on the other hand, turned its possessions into scoring opportunities—multiple, legitimate, gasp-worthy scoring chances. It was only through some desperate defending that the Americans remained within striking distance at the 40-minute mark.

And then, in the 41st minute, the game tilted on a questionable referee decision.

Working down the right flank, Colombian midfielder Carlos Sanchez attempted a rather innocuous cross. His marker, DeAndre Yedlin, stood just inside the penalty area and turned his back as Sanchez' struck the ball. The ball hit Yedlin in the hand and Garcia immediately blew his whistle and pointed to the penalty spot.

To the surprise of absolutely no one, Rodriguez claimed the penalty kick and delivered a beauty—a left-footed rocket into the side netting that sent Brad Guzan sprawling in the opposite direction.

The first half ended with Colombia ahead 2-0, and the U.S. desperate to generate some creativity in offense.

"Obviously the penalty decision was a major point in this game," Klinsmann said. "But it is what it is. You cannot change it anymore. He gave the penalty. He didn’t give any in the second half on Clint. But that’s the referee’s decision."

The coach did not make any changes during intermission, and for the first dozen or so minutes of the second interval the Americans played without much energy or ambition. However, a near-miss on a 59th-minute corner kick appeared to rejuvenate the Americans.

With Michael Bradley delivering from the corner flag, Dempsey broke free and headed the cross to the bottom-left corner of Ospina's goal. Unfortunately for the U.S., defender Sebastian Perez cleared the ball off the line with a sliding block.

The Yanks ramped up the pressure and maintained possession in the Colombian half, securing another corner and several spot kicks and, at least for a few moments, taking the came to the South Americans. In the 64th minute, Dempsey blasted a picture-perfect free kick around the Colombian wall and toward the upper corner of the goal. Bobby Wood raised his arms in exaltation, expecting the ball to go in. But Ospina denied the Seattle Sounders striker with a leaping save.

This would not be the Yanks' day.

Perhaps resigned to the fact that his Starting XI was not going to put one past Colombia, Klinsmann brought on Darlington Nagbe and Christian Pulisic in the 64th minute. The two offense-first midfielders replaced Jermaine Jones, who gave a ragged performance, and Bobby Wood, who was ineffectual at best.

In friendlies against Ecuador and Bolivia, Nagbe and Pulisic made an immediate impact. In an official international competition against the third-best team in the world, they did not.

Colombia came within a whisker of adding to its lead in the 77th minute when Bacca slid past John Brooks' offside trap and closed in on Guzan's goal, but his right-footed shot slammed off the crossbar.

Despite numerous late attempts at goal, the Americans could not solve the Colombian defense and dropped the Copa America Centenario opener by a 2-0 score.

The Americans will now fly to Chicago to face Costa Rica on Tuesday (8pm ET; FS1, UniMas, UDN) at Soldier Field. Colombia will play Paraguay at the Rose Bowl in Pasadena, Calif., also on Tuesday.

Share your take in the Comments section below, and be sure to rate the U.S. men's national team players with our patented Player Rating tool.