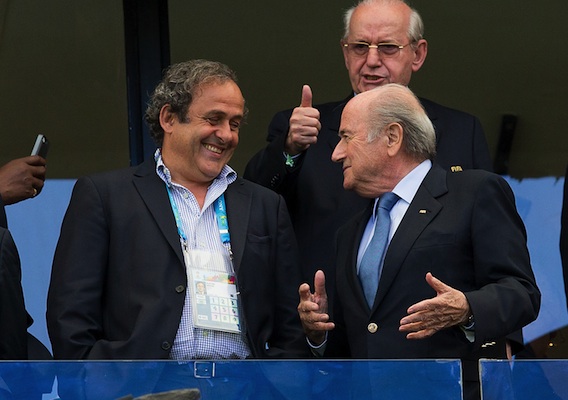 We asked broadcasters, journalists, lawyers, and former U.S. national team players for quick takes—100 words or so—on the FIFA bribery and corruption scandal. Here's what they told us.
BY various Posted
May 29, 2015
10:00 AM

Janusz Michallik
ESPN Analyst; Fox Sports
This day was always coming. Without sounding presumptuous, I was never, ever in the camp that thought that FIFA and Sepp were untouchable. This week we saw an earthquake of massive proportions with aftershocks that will be felt all the way to the top—beginning of an end to many in this administration. If the domino effect takes the right path, we will hopefully be in better, safer hands at some point in the near future. Trouble is, FIFA is way too big to control. The corruption and the facts as we know them will have to be proven in the courts. Imagine the corruption that we don’t know and likely will never know that takes place all over the world in local federations and on the state levels in various countries. This is all under the umbrella of FIFA and in a way an overwhelming responsibility for any organization that size. Whatever comes out of this, I hope that FIFA will be a better, leaner, and more transparent organization, so there is no “too big to fail” perception of it.

Noah Davis
Deputy Editor, American Soccer Now
Two words: Sunil Gulati. When the United States Soccer Federation president got elected to the Executive Committee, he vowed to reform FIFA from within. A little more than two years later, bam. That’s not to say Gulati had anything to do with the indictments, but it’s going to be interesting to see where he lands when the smoke clears. Assuming that he’s clean—and there’s no reason to think he’s anything but—I have to think he’ll gain power in FIFA as one of the most prominent reformer-minded executives, and one of the few left standing in CONCACAF and CONMEBOL. That has to be a good thing for the future of U.S. Soccer.

Tony Meola
Sirius XMFC; Fox Sports
In the short term, FIFA officials and others who have done “business” with FIFA will go to jail….(or they will “flip” and put others in jail.) Either way, criminals will be prosecuted. In the long term, if Sepp Blatter continues as the President of FIFA, I don’t see much changing as his new “cronies” will fall into the same pattern of greed as those before them. It is now time for Mr. Blatter to do what is best for the sport he claims to love so much and quietly walk into the Alps as we straighten out his mess. #Dreaming

Ted Philipakos
Player Agent; Professor, New York University
This was a perfect storm of American interest, legal opportunity, and international cooperation. When the stretching of American law across the world receives any applause anywhere, the target really had it coming. Unfortunately, there may be a degree of corruption that the public generally accepts from powerful entities; FIFA, though, had become an international symbol of wrongdoing, in almost comic fashion, before countless stakeholders, and a day of reckoning was inevitable. Because there’s plenty of investigating and maneuvering ahead, it’s difficult to predict exactly how this story ends. But I believe this does generate significant momentum towards desperately needed reform.

Brian Sciaretta
Contributing Editor, American Soccer Now
These FIFA arrest were a huge step forward but yet also a small drop in the bucket. Hopefully these investigations uncover as much as possible and answer may of our lingering questions. How deep was the corruption? How much money changed hands? How high did it go up within FIFA? I think everyone wants those who were responsible to be named and punished. That’s just part one. The second part is much harder and that is total FIFA restructuring. FIFA’s own internal structure only fosters corruption with its one-member-one-vote policy. That’s why most of the world (in terms of FIFA voting) sees Blatter as a hero. Unless there is restructuring, subsequent FIFA presidents and executives will likely be identical to the ones we have now. That change will be tough but never before has there been this much momentum.

Steven A. Bank
Paul Hastings Professor of Business Law, UCLA School of Law
It seems particularly appropriate that the FIFA officials were investigated using tools designed to fight foreign terrorists and will be prosecuted in part under a statute—the Racketeer Influenced and Corrupt Organizations Act (RICO)—adopted in 1970 to fight the Mafia. Cutting off the head of this snake will not kill its body.  Corruption is deep-rooted in soccer, extending to the federations of many nations. It is literally part of the culture. As the U.S. has found with its Foreign Corrupt Practices Act, which prohibits Americans from bribing foreign officials, true change must come from within.

John Godfrey
Editor-in-Chief, American Soccer Now
Just blow it up. The world loves soccer but does the world need FIFA? I don't think so. The corruption begins at the top but as we've seen and heard—and feared for years—it permeates the entire organization. So let's treat FIFA like one of those outdated Las Vegas casinos and press the detonator. Give me the button—I'll do it. My fantasy: Emboldened by U.S. legal action, UEFA pulls out of FIFA and proposes its own world tournament. The U.S. will sign on immediately. So will Argentina, Australia, Brazil, Canada, Japan, Mexico, South Korea...until it becomes clear that FIFA has lost its critical mass, and its authority. A new world soccer organization will rise from the ashes and fans of the beautiful game can finally have a soccer governing body that doesn't suck.

Graham Ruthven
Freelance soccer journalist
It's true that FIFA has never endured a day like it did on Wednesday. Soccer's world governing body is indeed crumbling, but even if Sepp Blatter is dethroned in Friday's election (which won't happen) more root and branch change is needed. Blatter has cultivated a culture of corruption at FIFA, meaning it will take more than just a few arrests to neutralize the poison. I'd like to believe that this is the beginning of reform in Zurich, but unfortunately much more is needed for that to happen.

John Stollmeyer
Former U.S. national team player
This should bring the change in leadership to FIFA that is needed. Within the U.S. Soccer Federation, this makes me think that there are more people involved than have come to light. Significant amounts of money are involved. How much of this money could have gone to help the players who have struggled and played for their countries? How has this hurt the development of the game over the last 30 years? I believe that this type of activity has been an obstacle to the growth of the game in the U.S. as well as many other countries around the world.

Jonathan Tannenwald
Philly.com Sports
For as much fun as I’ve had reading through the indictments—especially the details on Aaron Davidson and Traffic Sports—I’m not convinced that anything at FIFA will change. Sepp Blatter will cruise to re-election with votes from Africa, Asia, and CONCACAF’s minnows. And UEFA will make lots of noise, but I’m not at all convinced they’ll actually do anything. For all of Europe’s bellyaching, the U.S. backed up talk with action. Let’s see the so-called motherland of the game, especially England, actually leave FIFA. Then I’ll believe that real reform at the sport’s highest levels is truly possible.

Kristan Heneage
Freelance soccer journalist
It's both sad and unsurprising to see corruption nestling inside FIFA. This sport has an amazing potential to change lives and bring people together yet at present it feels like it is driving us apart. We need to examine every corridor and remove those with even an ounce of wrongdoing. Truth and accountability must be the foundations of the new organization.

OK, your turn. In 100 or so words, give us your take on the FIFA scandal, what you think will come of it, and/or what you'd like to see happen.