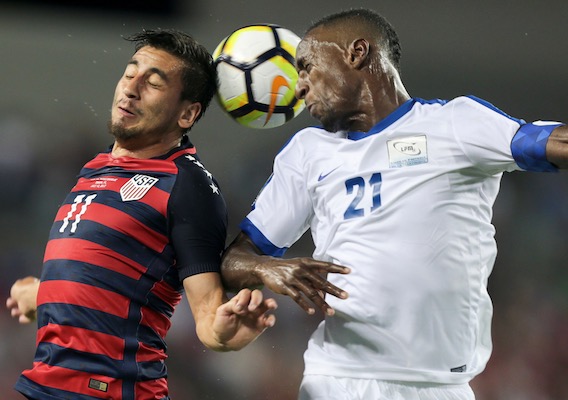 Jordan Morris stood out for the U.S. national team Wednesday night against Martinique, but his teammates failed to take advantage of clear chances and allowed a Caribbean minnow to stay in the game.
BY Brian Sciaretta Posted
July 12, 2017
7:55 PM

THE U.S. NATIONAL TEAM made things very difficult for themselves on Wednesday night in a 3-2 win over Martinique at the Gold Cup. If not for Jordan Morris, the game could have been far worse.

There were some good takeaways for the team. Players made good runs and put themselves in dangerous positions most of the night. But wasteful finishing, poor central defending, and a lack of an aerial game on both sides of the ball was frustrating.

For the second straight game, the U.S. team did not put an inferior opponent away. On Saturday Panama took it to the U.S. after the Americans took the lead. Tonight Martinique never controlled the run of play but the U.S. could not avoid dumb mistakes and made this game much closer than it should have been.

Here’s how the players performed.

Brad Guzan:The new Atlanta United goalkeeper had more work to do than expected and made some nice saves early but also was shaky at other moments. He should have come up with the save on Martinique’s first goal, a long-range effort. Rating: 4.5

Justin Morrow: Making his Gold Cup debut, Morrow was not as involved as he should have been against a weak opponent. Martinique’s plan was to clog the middle defensively and the wide players needed to be more effective. Rating: 5

Omar Gonzalez: The Pachuca native had a tough game despite scoring the important opening goal on a broken play in the box. Gonzalez needs to be dominant in the air and just was not. He looked lost in the box at times when Martinique pressed into the box. Rating: 4.5

Matt Hedges:  The FC Dallas captain did not look in synch with Omar Gonzalez and their lack of chemistry allowed Martinique to be way more dangerous than it should have been. Rating: 4.5

Eric Lichaj: The Nottingham Forest right back was one of the best American players on the night. He made a bunch of good passes to open up the game and delivered a very nice assist on Morris' first goal. Lichaj did have a bad turnover, however, which created a great second-half chance for Martinique. Rating: 6

Gyasi Zardes: Despite having a difficult 2017, Zardes was lively early in the game. At times he would be dangerous but other times his touch or finishing would let him down. But in the end he finished with a positive game. After Martinique equalized, Zardes provided the assist to Morris for the gamewinner, and his pass was the play of the night. Rating: 6

Cristian Roldan: The Seattle central midfielder made his international debut but did not stand out against a weak opponent. He should have been able to help break the game open as Martinique was trying close the passing lanes in the middle. It didn't happen. Rating: 5

Kellyn Acosta: The FC Dallas mainstay gave a decent performance before getting pulled in the 62nd minute. He had some nice passes and nearly had an early assist but Morris sent a header just wide. Acosta does find ways of getting a huge number of touches and staying involved. Rating: 5.5

Paul Arriola: The Club Tijuana winger was lively and involved but also wasteful in his touches near goal. Defensively he could have closed down better on Kevin Parsemain’s shot for Martinique’s first goal. He’s not far from being a very effective player but still needs to build a killer instinct. Rating: 4.5

Jordan Morris: The Seattle Sounder striker was the best player on the field tonight—by a wide margin. Morris was always lively. He could have scored more than two goals but he saved the U.S. from a brutal result with his well-timed runs and cool finishing. A bad offside call prevented a hat trick at the end of the game. Morris and Dom Dwyer are now in an interesting battle for a spot on the national team. Rating: 7.5

Juan Agudelo: The New England Revolution forward did not impose himself. He made some nice runs and passes but was capable of dominating a game like this and came up short. Rating: 5

Alejandro Bedoya: He came on for Acosta in the 62nd minute and made a quick impact, sending Lichaj into a dangerous area in the 64th minute in the build-up to the second goal. But minutes later Bedoya missed a wide-open shot over the bar from inside the box. Rating: 6

Chris Pontius: The Philadelphia Union winger replaced Arriola in the 73rd minute and did not make much of an impact. Rating: 5

Dax McCarty: He helped kill off the game in the 86th minute after replacing Agudelo. McCarty forced a few turnovers and made some crisp passes that transitioned the team from defensive to offense. Still he did not do enough for a rating. Rating: NR

Bruce Arena: Arena did not have a great outing in the opening draw against Panama and he stood up and took the blame. The struggles in this game—at least offensively—were on the players, not Arena. The Americans were in the right position to score several more goals but couldn’t finish. Arena’s biggest cause for concern is the lack of chemistry in central defense, which should be much better after more than two weeks together. Rating: 5.5