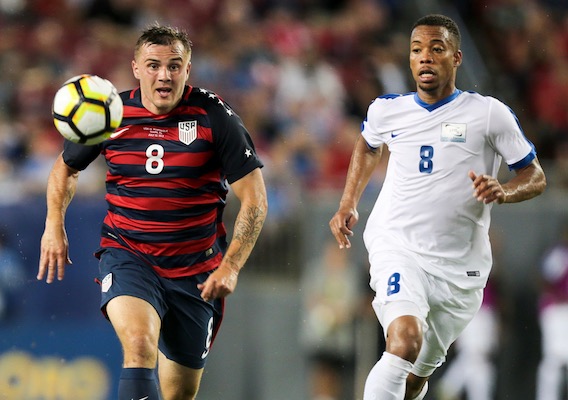 The U.S. couldn't get on the scoreboard until the second half and Brad Guzan gave up a howler in a 3-2 Gold Cup win over Martinique. It wasn't one for the time capsule but the U.S. got the win.
BY John Godfrey Posted
July 12, 2017
4:00 PM

BRUCE ARENA'S U.S. men's national team didn't wow specators but it did claw out a 3-2 Gold Cup win over Martinique Wednesday night. Omar Gonzalez opened the scoring for the U.S. and Jordan Morris tallied twice in the second half to lift the Yanks to the top spot in Group B.

The game might have gone in a different direction but with the U.S. up by two Brad Guzan gave up a shocking goal at the 66-minute mark to let the visitors back into the match. And then a quirky, deflected shot leveled the score with 15 minutes remaining.

To their credit, the U.S. men stepped things up and Morris scored the gamewinner a few minutes later, but Martinique never should have been close to earning a point.

It was one of those CONCACAF contests.

After starting nine of the same players against Ghana and Panama, Bruce Arena mixed things up against Martinique. Juan Agudelo and Morris started up top, midfielder Cristian Roldan earned his first-ever start for the Yanks, and Eric Lichaj and Justin Morrow manned the fullback positions. Only two players—Guzan and central midfielder Kellyn Acosta—started all three matches.

Was it a C Team? Maybe. But the fact remains that the United States should always dominate Martinique in a full international match.

But that's not what happened.


The Americans started the game with welcome dose of aggression, looking to apply pressure to a weaker opponent and hoping to erase the memory of a slow start against Panama four days prior.

Lichaj connected with Agudelo down the right flank early, but Agudelo's final pass was lacking. On the opposite side, Gyasi Zardes pushed hard to create a few chances but his crosses and shots were off target in the first quarter of the contest.

The game's first legit chance came in the 26th minute when the U.S. combined through the middle of the field. Acosta found Morris at the top of the penalty area and the Seattle Sounder found Agudelo sneaking in on the left. Agudelo steadied the ball with a quality touch and launched a shot on goal, but two sliding Martinique players were on hand to deflect the shot.

Martinique nearly opened the scoring in the 32nd minute when the U.S. defense looked confused and Kevin Parsemain blasted a left-footed shot on goal. Morrow deflected the shot, and it ricocheted off Guzan's goal before the goalkeeper scooped it up.

At this point the Yanks began to step up the pressure, producing back-to-back-to-back corner kicks in a short span. Kellyn Acosta's crosses were solid, but Gonzalez and Matt Hedges could not impose their will in the box.

At the 40-minute mark, with game still scoreless, the Yanks were desperate to score a goal but it was Martinique that came closest.

Stephane Abaul came within a foot or so of  at the 42nd-minute mark when he leapt to meet Sebastien Cretinoir's cross but his header flew a few feet past the far post. One minute later Parsemain forced a good save out of Guzan when Gonzalez and Lichaj botched a connection in the U.S. half of the field and Martinique pounced.

The Yanks burst out of the gates in the second half and nearly took the lead three minutes after the break when Paul Arriola ran onto a deflected Agudelo shot and blasted a point-blank shot off the crossbar.

Frustrated U.S. fans began chanting "We want Dom! We want Dom!" around the 50-minute mark—a cry for Dom Dwyer, who has proved tidy with his opportunities over the last two matches. But Arena did not call on the Sporting Kansas City striker.

The Americans finally scored in the 53rd minute when Omar Gonzalez pounced on a rebound after a corner kick and calmly placed the ball behind Martinique goalkeeper Kevin Olimpa.

Morris doubled the U.S. lead 10 minutes later after Lichaj made a cagey run into the box and delivered an inch-perfect cross into the center of the box.

As Martinique seemed to tire, the Yanks pressed forward with abandon—resulting in a wide open match that produced multiple chances.

Agudelo, in particular, seemed determined to produce a strike, often to the detriment of his teammates. Alejandro Bedoya came at the one-hour mark and was presented with a gilded chance in the penalty area...but lifted it over the crossbar.

But just when it seemed that the floodgates were set to open, Brad Guzan gave up a howler, allowing Parsemain to beat him from long range at the 66-minute mark.

And then Parsemain evened things up at the 74-minute mark on a quirky play that came at the end of a swift counterattack. He was sprawled out on the field when an off-target shot from Johan Audel bounced off his frame and improbably lofted over Guzan and into the back of the net.

Before anybody could catch their breath, however, the Yanks took the lead for good. Zardes, who had struggled throughout the match, earned the assist with a good run down the left flank and a cross that landed right in Morris' path. The former Stanford man placed the ball perfectly to give the U.S. a 3-2 advantage.

A warn out Martinique couldn't produce any chances in the final stages of the contest, and the U.S. killed the game that was closer than most would have expected.

Next up for the Yanks: the group finale against Nicaragua on Saturday night.

What did you think of the U.S. performance? Share your take in the Comments section below.