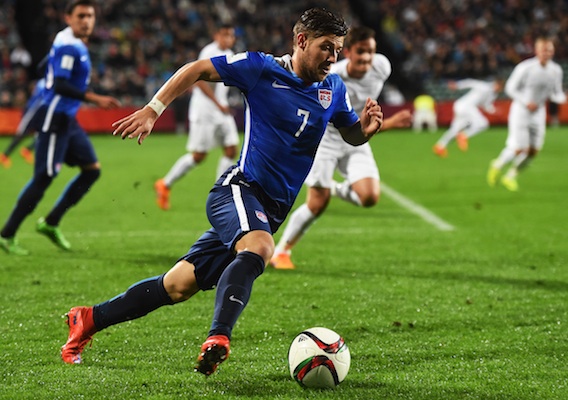 Paul Arriola on Colombia: "There's No Room for Error"

The 21-year-old Club Tijuana midfielder missed out on last year's Olympic qualifying tournament but hopes he will get a chance to contribute in two do-or-die matches against Colombia.
BY Brian Sciaretta Posted
March 23, 2016
1:30 PM

THE UNITED STATES U-20 TEAM was clinging to a one-goal lead in the 84th minute of a do-or-die game against Colombia when the corner kick curled in. The ball fell for Deinner Quiñones, who sent it toward the far corner, out of the reach of U.S. keeper Zack Steffen, surely the equalizer—until Paul Arriola rose up to head it off the line.

Arriola’s clearance last summer preserved a 1-0 scoreline for the Americans and, with it, advancement to the U-20 World Cup quarterfinals. If not for Steffen’s penalty kick save the minute before, it might have been the Americans’ best defensive play of the tournament.

On Friday, if called upon, Arriola is prepared to do it all over again for the U-23s.

“I definitely think toward the end of games, there is a mental challenge on how to physically stay in the game,” Arriola told American Soccer Now. “Every coach, especially at the national team level, has always keyed in on doing so well on the field that they can’t take me off. For me, it’s always been attacking and defending. You see players who are so great with the ball but the reason why they are not playing is that they are only talented with the ball and their work habits aren’t the best.

"In key games, you need players who can go back and forth.”

Arriola has begun to come into his own of late at Club Tijuana—featuring in 21 Liga MX games since last fall, including three straight 90-minute outings under former Mexico coach Miguel Herrera entering the international break—and U.S. U-23 coach Andi Herzog has taken notice. After Herzog had left the Californian off the roster for October’s CONCACAF Olympic qualifiers, which ended with a third-place U.S. finish and without a berth in Rio, Arriola was one of nine new faces when the roster for the playoff series against Colombia was released Saturday.

Though “definitely disappointed” about not making the team in October, the 21-year-old is confident he can make a positive contribution now that he’s been called up. Helping his cause? He gives Herzog plenty of places in which to use him.

“I know that Andi at times likes to play a 4-4-2 diamond,” Arriola said. “At this point in my career I’m not much of a forward; I’m more of an outside midfielder. Thankfully since Miguel Herrera has been at Xolos, he’s been testing me at different positons. It’s helped me out.

“I’ve played right wingback in a backline of five where I love to attack—I love to get down the line and beat my guy and get crosses in. In two games [earlier this month] we played a 4-3-3 and I was on the right side in the center, and then there are times I play as an outside winger in a 5-2-3. So far this season, I’ve been able to see all three different positions and so far I’ve had success in each. If Andi decides to go with a 4-4-2 diamond, I think I can fit in on the right side, being either tucked in or out wide.”

The four other former U-20 players brought in to this U-23 group understand Ariola’s value as well.

“I am happy Arriola is in the squad,” said right back Desevio Payne, who hopes the two can replicate their strong partnership down the right flank. "Along with great pace, he also brings superb technical skill to the team, and I hope we can use that to our advantage against Colombia.”

The step up in age groups may present a challenge, but “the best thing” Herrera has given him, Arriola says, is confidence—a key commodity after years of inconsistent playing time that comes along with having five different coaches since he first went on trial at Tijuana in 2012.

“He says there is no player that has the speed I have,” Arriola said.

An added motivator? Getting rid of the bad taste in his mouth.

In the quarterfinals of that U-20 World Cup, in the game Arriola helped make possible through his goal-line stand, the U.S. played Serbia to a scoreless draw through 90 minutes, then 105, then 120. The shootout came next, and Arriola, still in, converted his attempt.

Until now, it was his final kick in a U.S. jersey, as Serbia went on to win the match and, ultimately, the tournament. One that had been right there for the taking.

“In these types of games there is no room for error,” Arriola said. “From the first minute to the 180th in the second game, you have to play with guts. You have to really feel the love and the passion. Not just because they do but because as Americans we’re considered fighters and we’re considered ones that never give up. That’s definitely what it’s going to take for us to beat Colombia. No one is putting Colombia down, but at the same time, we’re not saying they’re going to run over us.