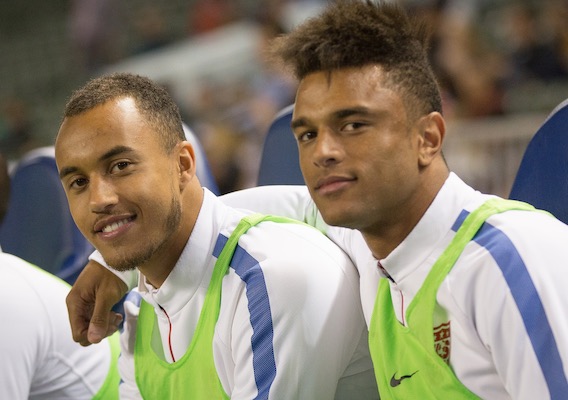 Overhauled U-23 Squad Will Try to Book Ticket to Rio

If at first you don't succeed...overhaul the roster. That seems to be the mindset of U.S. U-23 coach Andi Herzog, who has named a squad to face Colombia in a two-game Olympic qualifying playoff.
BY Brian Sciaretta Posted
March 22, 2016
1:30 PM

UNITED STATES UNDER-23 COACH Andi Herzog on Saturday released his 23-player roster for the upcoming Olympic qualifying playoffs against Colombia, and it can be summed up largely in two words: heavy turnover.

From the team that finished in a disappointing third place at the CONCACAF qualifying tournament in October, Herzog dropped Alonso Hernandez, Maki Tall, Gboly Ariyibi, Gedion Zelalem, Charlie Horton, Will Packwood, Boyd Okwuonu, and Zack Steffen. Marc Pelosi and Cameron Carter-Vickers were forced out due to injury.

Here’s the new-look team with my thoughts below.

The injury to Carter-Vickers, coming late in the week, forced Herzog into late changes, but he still has some nice options—all with professional experience.

Matt Miazga likely will be one of the starters in central defense, having done a nice job in qualifying in October after his star turn at the U-20 World Cup. He’ll have some rust, given his lack of matches since his transfer to Chelsea in November, but he’s still a big part of this team regardless.

Who will partner with him? Tim Parker of the Vancouver Whitecaps could be the leading candidate after playing a role in January camp. Walker Zimmerman has been strong for FC Dallas as well but was only added after Carter-Vickers was dropped; that’s probably telling as to where each player stands in Herzog’s order.

The most noticeable improvement from the U-23 roster in October comes at fullback. It had been a major area of concern during the qualifying tournament, with Boyd Okwuono or Matt Polster (a midfielder) playing right back while Dillon Serna and Marc Pelosi (midfielders both) platooned at left back.

Herzog will have natural fullbacks to work with against Colombia. Desevio Payne, a right back who can also play on the left, will make his return to the U.S. setup after a strong U-20 World Cup last summer, and Brandon Vincent is a rare natural left back who was singled out by Jurgen Klinsmann as having impressed at January camp. Kellyn Acosta, meanwhile, is primarily a midfielder but is listed as a defender on this roster, and it’s not exactly a shock: Acosta showed well as a left back for the senior team in January, starting both friendlies.

The issues at fullback in October, combined with a lack of natural wide midfielders, meant virtually every U.S. attack in October had to come up the middle. This time around, that shouldn’t be a problem.

Julian Green played for the U.S. U-23s in November friendlies against Brazil, and while he’s continued to languish in the reserves at Bayern Munich, he should bring experience to the team nonetheless. Paul Arriola, who loves to attack down the right side, also rejoins the U.S Soccer setup for the first time since a very strong U-20 World Cup last summer.

With Green and Arriola, there promises to be not just added width but added speed as well. All told, this group should bring more variety in the attack.

Goal-scoring could be a weakness

This U.S. U-23 team is improved from October but not in every area—most notably at up top. Jordan Morris and Jerome Kiesewetter had strong tournaments last fall, but beyond them, there wasn’t much.

Alonso Hernandez and Maki Tall both have struggled at the club level, and both are gone. But in their place are Khiry Shelton and Mario Rodriguez, who may not be much of a step up, if any: Shelton spent most of 2015 hurt, while Rodriguez has never really risen above the reserves levels in Germany.

There’s going to be a lot of pressure on Morris, then, to continue to be the main weapon. A better midfield will go a long way, but who will be there for the finishing touches?

No Brooks or Yedlin

Despite being age-eligible for the U-23 level, John Brooks and DeAndre Yedlin instead were named to the full national team on Sunday for World Cup qualifying against Guatemala. The two are among the best in this age group and are playing consistently in Europe’s top leagues, with Brooks having a breakout season for Hertha Berlin.

In theory, either player could still be added to this qualifying roster, although their clubs would have to agree to it and are under no obligation to do so. But a partnership of Brooks and Miazga at this level is tantalizing, and while the U-23s are in better shape at right back, the Sunderland-based Yedlin would give Herzog more experience and could also sneak up and play right wing.

Will it happen? In all likelihood, no. But it’s worth keeping an eye out for it, just in case.