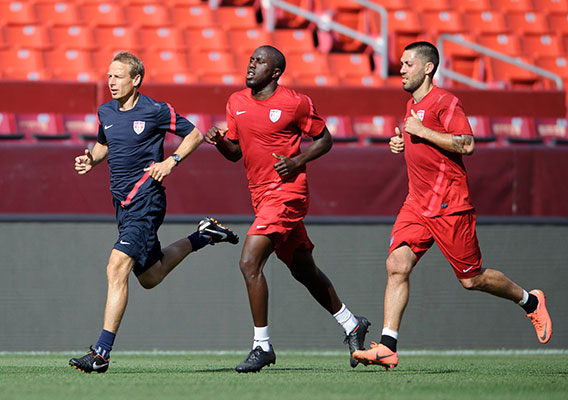 Morning Read: Altidore Is Back in the Running

With Jurgen Klinsmann planning to name his roster today for Wednesday's friendly in Russia, all eyes are on the candidates who are trying to make a good impression with the coach.
BY John Godfrey Posted
November 12, 2012
12:00 AM
Like Jozy Altidore, for instance. Klinsmann called in Altidore for the Russia match, and deservedly so. Did you see his left-footed laser this weekend? When was the last time Altidore scored a goal like that for the U.S. national team? Actually, when was the first time Altidore scored a goal like that for the U.S. national team? Determined, inventive, lethal—these are not words typically associated with the New Jersey native. Perhaps Klinsmann was smart to put the striker in the penalty box for a brief spell. Altidore seems eager and motivated to re-claim his spot on the national team, and if he delivers in the final third, Klinsmann deserves some credit for lighting the fire. Sacha Kljestan picked an opportune moment to tally his first goal of the season for his club team, Anderlecht. The Belgian league leaders clubbed Club Brugge, 6-1, and Kljestan got in on the action with a strike in the 54th minute. That goal, combined with Kljestan's assist last week against Zenit St. Petersburg in Champions League action, should ensure that the California native gets called for the Russia contest.
Jermaine Jones may or may not get the call against Russia, but he certainly delivered a pretty assist in Schalke's 2-1 win over Werder Bremen on Saturday (see above). Molde clinched the Norwegian Eliteserien championship on Sunday when Ole Gunnar Solskjaer's squad defeated Honefoss 1-0. That result, combined with Sandnes Ulf's 2-1 win over Stromsgodset, means that Josh Gatt should be free and clear to join Klinsmann and the rest of the Yanks in Krasnodar. In fact, it's a done deal. And it's time. Let's see what this Michigander is all about. Nick DeLeon won't be going to Russia—he has a date next weekend at RFK—but the 22-year-old midfielder is looking more and more like a U.S. national team prospect. He scored his second MLS playoff goal in yesterday's Houston's 3-1 win over D.C. United. We're going to keep a close eye on him.